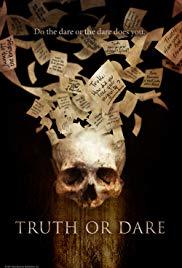 Truth or Dare is a 2017 horror film directed by Nick Simon and distributed by Syfy. Thirty years before, eight friends were forced by a malicious being to play a deadly game of Truth or Dare with only one survivor. Now, eight friends from college have come to the same house and history repeats itself. There's a glimmer of hope. They only have to play three rounds of the game, they have managed to get by with technical skirting of the rules, and it's possible to "share the dare" to blunt its impact.
Advertisement:

Not to be confused with Truth or Dare (2018), a suspiciously similar film released in 2018 with similar characters and the same plotline, or Truth or Dare?: A Critical Madness, a 1986 horror film that spawned several sequels.