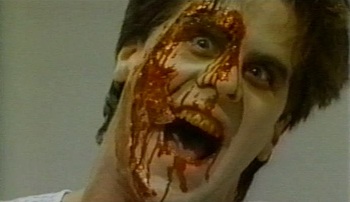 Truth or Dare?: A Critical Madness is a 1986 So Bad, It's Good B-Movie horror film revolving around a criminally insane man named Mike Strauber.

After coming home from work one day, Mike discovers his wife, Sharon having sex with another man. This causes him to leave the house in a fit of rage, which leads him to a camping ground, where he finds a female camper looking to play a game of Truth Or Dare. However, the "dares" in this game are mostly gory and violent, with such examples as "pull out your tongue" or "chop your arm off". Mike willingly goes along with the game, until authorities find him. In a twist, it turns out that Mike hallucinated the camper and is promptly thrown into an institution.He's released a year later for good behavior and promptly decides to track down the man who slept with his wife. Mike murders him and is caught trying to kill Sharon, leading to him being thrown, once again, into the loony bin.Back in the institution, Mike ends up playing another game of Truth Or Dare, this time with 3 hallucinations, whereupon one of them dares him to slice his face off with a knife. Mike does so and is found by the staff of the institution.

5 months later, we see Mike wearing a copper mask being taunted by an employee with a picture of his wife.Mike goes fully berserk and murders him with a pencil, which gives him the chance to escape. Once out of the institution, Mike hijacks a car full of weaponry and starts to head towards Sharon's house. On the way, he murders everyone in his way, with examples such as a drive-by chainsawing and running over a woman and her child. After police are informed of the rampage happening before them, they send out of detectives named Rosenberg and Thorne. Thorne manages to get to Sharon's house first and, along with Sharon herself, is killed in a shootout with Mike. Rosenberg arrives a bit after and finds Mike bleeding out from a shot by Thorne. Rosenberg manages to calm Mike down, which leads to him being taken back to the institution.

The film was followed by four sequels, all created by original writer and director Tim Ritter. They include 1994's Wicked Games, 1998's Screaming for Sanity: Truth or Dare 3, 2011's Deadly Dares: Truth or Dare Part IV, and 2016's I Dared You! Truth or Dare Part 5 (a crowdfunding project co-directed by Scott Tepperman).

Not to be confused with the 2017 film Truth or Dare (2017), in which a cursed house forces eight college students to engage in a similar game of increasingly self-destructive dares, or the 2018 film of the same name and... the same plot.