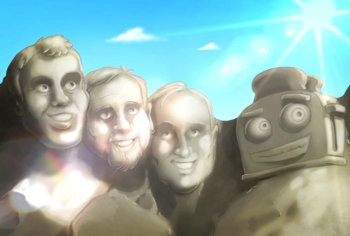 "We don't make movies, we make them funny!"
"Who you gonna get to riff those tracks?
(I don't ever pick tracks where the riffs are missin'!)
Why you always gotta pick RiffTrax?
(Only RiffTrax picks are the tracks worth riffin'!)"
— "It's Time for RiffTrax (RiffTrax Theme Song)" by Jonathan Coulton
Advertisement:

Seven years after Mystery Science Theater 3000 went off the air, head writer/star/novelist Michael J. Nelson decided to try profiting off the franchise that made him famous via bringing back the whole concept of riffing on bad movies — but with a twist. Using the format of a podcast, Nelson now riffs on big budget blockbusters that studios would never, ever let people like Mike make fun of. Hence RiffTrax was born.

RiffTrax is a website where you can buy (for $3-5 a file) audio MP3s of Mike and fellow MST3K alumni Kevin Murphy and Bill Corbett (aka the second voices of Tom Servo and Crow) making fun of big-budget blockbusters, such as Batman & Robin and the Star Wars Prequel Trilogy. Of course, you need to actually own or rent copies of the movies too, since the audio file only contains the snarky commentary. RiffTrax also releases riffs of educational shorts from the public domain, and lately have been featuring more B-movies (public domain and licensed) with pre-synced audio.

Synchronizing the video to the riff is explained on the website in detail. There are generally two ways to go about it: either use the special Windows software to synchronize the riff with your DVD, or play the MP3 and DVD separately with whatever you have on hand. Throughout the riff, a robotic voice called Disembaudio, visually depicted as a robotic toaster as seen in the Trope Image, recites lines from the DVD for reference. If the DVD and Disembaudio say the line simultaneously, you're in sync. Otherwise, pause whichever is ahead.

Nelson started RiffTrax solo being joined by Murphy and Corbett soon after. Occasionally, they're joined by such guest stars as Neil Patrick Harris, Chad Vader, "Weird Al" Yankovic and Rich "Lowtax" Kyanka. Disembaudio will also chime in now and then to crack a joke. Users are also allowed to send in their jokes; RiffTrax then sells them and shares the money with the users. This program is called iRiffs; notables include Doug Walker and his brother Rob riffing Batman Forever.

The concept was preceded by a brief series called "The Film Crew", in which Mike, Kevin and Bill played themselves and were part of a Framing Device similar to MST3K, but much more mundane: they were working in the industry and tasked by their boss, Bob Honcho, to provide commentary on bad movies. A combination of Jim Mallon (then owner of the MST3K franchisenote Series co-creator Joel Hodgson ultimately acquired full rights to MST3K from Mallon in August 2015) delaying release alongside MST3K DVDs and budget costs in comparison to RiffTrax torpedoed that project, but RiffTrax lives on and even inspired original MST3K host and series creator Joel Hodgson to get in on the act and create his own spin-off, Cinematic Titanicnote This project didn’t last long by comparison, but Joel eventually was able to relaunch MST3K as a Netflix series. Eventually Cinematic Titanic / MST cast members Mary Jo Pehl and Bridget Jones Nelson began riffing shorts and movies together for RiffTrax.

. RiffTrax also started Kickstarter drives, to legally license films for their live shows, first for Twilight; while they didn't succeed in getting the rights to Twilightnote The rights holders basically said "Too soon, but maybe in the future", they snagged the 1997 sci-fi cult classic Starship Troopers. Another Kickstarter was successful enough to not only pick up the notorious American adaptation of Godzilla, but also reached the crew's stretch goal of obtaining Anaconda. A third garnered enough funds to create "The Crappening", netting four terrible movies to riff, including a redo of the infamous The Room.

On April 1, 2014, the crew held a special on National Geographic channel, where they targeted on classic NatGeo programming. Titled "Total Riff Off", this was the trio's first appearance on cable TV in over 15 years since MST3K was canceled. The NatGeo special was later released as a video-on-demand title on the website. Another ran in December 2014.

On March 8, 2016, a Kickstarter was announced for a live show to commemorate RiffTrax' tenth anniversary. The show, held in Minneapolis on June 28, was highlighted by an MST3K reunion, with Nelson, Murphy and Corbett joined by fellow alumni Hodgson, Trace Beaulieu, Frank Conniff, Pehl and Jones Nelson (and new MST3K host Jonah Ray) for a night of shorts-riffing. The Kickstarter drive, which funded a live riff of MST3K favorite Time Chasers in May as well as the reunion show, took just four days to meet its base goal.

On February 21, 2017, a second Kickstarter was launched for three RiffTrax Live shows, featuring Samurai Cop, Summer Shorts Beach Party, which will reunite many of the old MST3K cast once again and a mystery film, which was revealed on March 27, 2017, to be The Five Doctors.

A video game tie-in was released on 5 May, 2022, using a similar structure to The Jackbox Party Pack, with players entering a room code and submitting riffs as the punchline to short clips, then voting on which line is funniest. Much like Use Your Words, which also has a clip-captioning exercise, there's a decoy answer from "Riff Bot" in the mix; however, all player lines are voiced by surprisingly good text-to-speech while Riff Bot's lines were recorded by Mike, Bill and Kevin.

RiffTrax has examples of:

"Rifftrax -- Some movies have it coming."