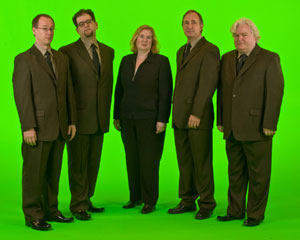 The Titans are shown standing or seated on scaffolding and filmed in silhouette in the studio-recorded DVDs; on the live DVDs and shows they sit at music stands with their scripts (or more recently, an iPad) in front of them. They riff bad movies, in the manner of MST3K. The actors essentially play themselves as they participate in an experiment for some unknown, possibly shadowy corporation or military force. The story currently provided to the cast is that there is a tear in the "electron scaffolding" that threatens all digital media in the world. Their experience doing MST3K is key to the organization's plans. The riffing for each film is recorded to a "nanotated disc" and inserted into a "Time Tube" by Hodgson that descends into the frame at the end of every episode. The unknown organization is very firm on keeping the cast focused on their duties, providing no time frame for completion and requiring them to stay within the facilities at all times. They apparently have massive resources and an autonomous military force, which they use to keep the cast in line. As of now, the cast is inquisitive of the true purpose of the experiments but have no major problems as, aside from having to watch bad movies, they are well-treated. There are often host segments on the studio DVDs, but unlike the MST3K ones, the players remain in silhouette in the theater.

On February 16, 2013, it was announced that Cinematic Titanic was going on indefinite hiatus. According to a notice, due to "5 people living in 5 different cities with different lives and projects, it has become increasingly difficult to coordinate our schedules and give Cinematic Titanic the attention it requires to keep growing as a creative enterprise and a business."

As of East Meets Watts, the show has moved from the scripted, silhouetted shows to taping the live shows (which are staged similarly to the RiffTrax live shows). As of 2021, episodes are available through Shout! Factory.

Compare and contrast RiffTrax, which features a different set of MST3K alumni. The main difference between the two is that the RiffTrax crew can riff on more contemporary films while Cinematic Titanic concentrated on obscure B-movies similar to what you'd find on the original MST3K. Also, Cinematic Titanic has a continuous storyline while RiffTrax does not. (That storyline is not referenced in the live shows or the DVDs recorded from them.)