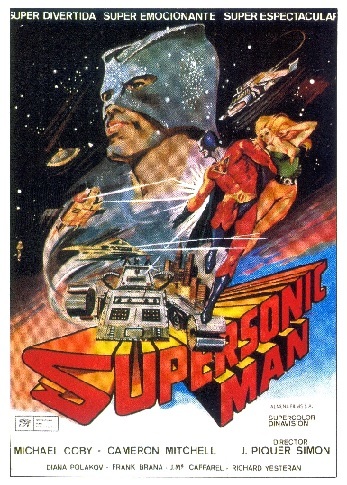 Kronos, also known as Supersonic Man, is an alien hero (José Luis Ayestarán, credited as "Richard Yesteran") who is sent to Earth. His mission: to thwart a Mad Scientist's plans to Take Over the World, since his methods of doing so could destroy the galaxy. Said scientist, Dr. Gulik (Cameron Mitchell), has kidnapped Professor Morgan (José María Caffarel, credited as "John Caffarel"), the inventor of the world's most efficient fuel supply, and to ensure his participation in the plan, Gulik also sends thugs to kidnap Morgan's daughter, Patricia (Diana Polakov). However, the thugs run up against Supersonic Man, both in his superhero form and his civilian form as reporter Paul (Antonio Cantafora, credited as "Michael Coby"), for whom It's Personal as he has fallen for Patricia.

Has nothing to do with Sonic the Hedgehog's Super Mode and is certainly not what Freddie Mercury wants to turn you into.

Useless trivia: This was the final film shown on Son of Svengoolie. That's right, it was shown during the episode where Svengoolie did his infamous song about being cancelled, to the tune of "Busted" by Ray Charles.