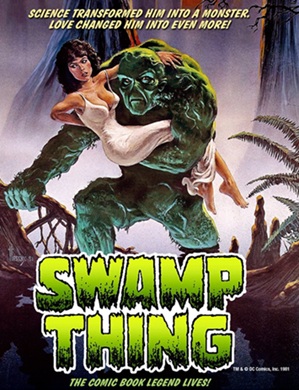 Not long ago, in the unexplored reaches of an unmapped swamp, the creative genius of one man collided with another's evil dream and a monster was born. Too powerful to be destroyed, too intelligent to be captured, this thing still pursues its savage dream.
— Opening text
Advertisement:

Swamp Thing is a 1982 film directed by Wes Craven, based on the DC Comics character.

The film centers around Dr. Alec Holland (Ray Wise), who's studying a bio-restorative formula in the middle of a swamp that could possibly grow plants anywhere, and Alice Cable (Adrienne Barbeau), a Washington agent who is sent to look after the research. During an attack on the facility orchesrated by one Anton Arcane (Louis Jourdan), who seeks the formula for himself, Holland is dosed with the stuff and after taking a fiery dip in the local waters, is turned into the eponymous being. Now Alec must protect Alice, the sole survivor of the attack beside himself from Arcane's men who are searching for the remnants of the notes on his work.

In 1989 it was followed by a campier sequel The Return of Swamp Thing.