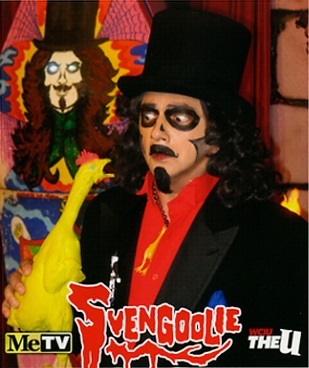 Svengoolie is the eponymous Horror Host of a long-running series in Chicago, where he shows movies (often, but not always, Horror Films). During commercial breaks he'll crack jokes, tell some history of the film being screened, sing songs, do sketches, etc. A popular feature is "SvenSurround," where he enhances the original audio track of the film with sound effects and dubbed in dialogue.

The character has gone through many incarnations throughout its run, starting in 1970 on Chicago's WFLD as a part of Screaming Yellow Theater, where the character was played by Jerry G. Bishop, and a key writer was Rich Koz. When a controlling stake in WFLD was bought out by Kaiser Broadcasting, SYT was cancelled and was replaced by a Horror Host from their Cleveland station; it barely lasted a year in Chicago. It was resurrected in 1979 after Field Communications took over Kaiser, with Koz portraying "Son of Svengoolie" in a show of the same name. Said show was cancelled when Fox bought out WFLD in 1986, but returned as simply Svengoolie (with Bishop's blessing) on stations in Chicago and Milwaukee on New Year’s Eve 1994 and has been running since.

On April 2nd, 2011 Svengoolie went national when the MeTV network expanded out of Chicago and Milwaukee and became a full-fledged nationwide network. Find out more here.

Compare with Mystery Science Theater 3000 and Off Beat Cinema.