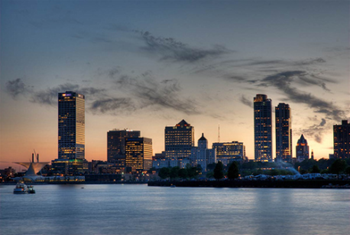 Situated on the western shore of Lake Michigan and known as as "Brew City" or "The Brew" for having been home to four major brewing companies throughout its history note Blatz, Schlitz, Pabst, and Miller... the first two are now owned by Pabst and the last two are now headquartered in Illinois and several smaller ones note  most notably Gettelman, bought up by Miller in 1961, and the also-defunct Independent Milwaukee Brewery, producer of Braumeister. Milwaukee is also home to Harley-Davidson, a motorcycle manufacturer that is known just as much for their clothing line, hotel and restaurant chains, and making high-priced toys for wealthy executives nowadays. One of the more interesting aspects about Milwaukee is that it's the only major American city to have ever elected three Socialist mayors.

Milwaukee's status in the world of pop-culture has been a contentious issue for its citizens. Never was this more obvious than in 2008 when a privately-funded bronze statue of Arthur "Fonzie" Fonzarelli was erected along the city's Riverwalk to heavy controversy. Many residents feel that the city's portrayal as an urban Eagleland in Happy Days and its spinoff, Laverne & Shirley was not only historically inaccurate note During the Red Scare in The '50s, when the shows took place, Milwaukee's mayor was Frank Ziedler, one of the three Socialists whom Alice Cooper alluded to in the Wayne's World quote at the end of the last paragraph., but has hurt the city socially and economically by stigmatizing it as a stodgy, blue-collar town. In fact, Garry Marshall, the shows' producer, had never even stepped foot in the state of Wisconsin until the statue's dedication. This is such a big issue locally that Milwaukee Mayor Tom Barrett, upon being elected in 2004, quipped that one of his goals was to let the world know that "Laverne and Shirley don't live here anymore."

The stodgy image extends to the city's flag

, a crowded mish-mash of buildings, seals and icons that was created in the 1950s (and includes a few now non-existent things, like County Stadium) and is maligned in the flag and design communities (ranking fourth last in one poll, only ahead of 'futzing around in MS Paint' entries for smaller towns). It has been oddly defended by older city politicians and residents; only in 2018 has an incredibly simpler and acclaimed "People's Flag" begun to gain strength for an official adoption by the city.

Milwaukee was incorporated on January 31, 1846 as an end to the violent "Bridge Wars" between three different settlements along the Milwaukee River: Juneautown, Kilbourntown, and Walker's Point. (This is still visible, however, in the streets: many that intersect at the Milwaukee River do not cross straight, but tend to angle on each side. North of the river the streets have names: these change into numbers once you cross the river, e.g. Water St. turns into 1st.) Although Milwaukee grew generously, in population and physical size, it never truly lost the feel of three separate towns; as the immigrants who came to Milwaukee tended to settle in ethnic clusters along those same lines, thus entrenching it for generations to come.note Milwaukee is actually the single most segregated city in the United States. It's not entirely because of sociopolitical or economic circumstances, but you can tell which neighborhood you're in depending on which side of the street you're standing in.

Sometimes referred to as East Milwaukee or simply, "The East." The east side grew out of the original Juneautown settlement into an Italian neighborhood, and is still home to a large number of Italian-owned businesses such as restaurants and bakeries.

Towards the end of The '60s, the east side's corner bars and coffee shops such as the Avant Garde became incubators for Milwaukee's growing counterculture that eventually centered on Brady Street. Predictably, this led to a wave of gentrification through The '90s, turning the surrounding area into a bourgeois bohemia... especially on or near the lake. In turn, the original Brady Street scene has since moved west across the Milwaukee River into the neighborhood of Riverwest.

The University of Wisconsin-Milwaukee was founded in 1956 note out of a merger between the already established Wisconsin State College of Milwaukee on the upper east side to the University of Wisconsin Extension in Downtown Milwaukee, and has since grown to boast one of the top film schools in the world. Many UWM Film School grads find work in Hollywood and over 100 episodes of CSI have been shot by UWM alumni. The film school is also credited for the numerous film festivals that now call Milwaukee's East Side home, the biggest of which is the Milwaukee Film Festival, which takes place every September and into October.

The university's rapid expansion has also drawn the ire of older residents, who loathe how much of a college town East Milwaukee has become. This came to a head in the fall of 2012, when Milwaukee's Police Chief sent a letter to the university stating he considers UWM students to be "guests" and not citizens, which angered many students and non-students alike.

The original Juneautown is now known as Eastown, and makes up the eastern half of Downtown Milwaukee. It's most well-known landmark is the Brise Soleil ("Sun Breaker") of the Milwaukee Art Museumnote the sailboat-looking thing on the left side of the page image.

Sometimes referred to as North Milwaukee or simply, "The North." The north side grew out of the original Kilbourntown as it was settled by Bavarian immigrants, many of whom fled what is now known as Germany after an unsuccessful revolution in 1848 and brought with them their beer and pro-labor politics... both of which would have a profound effect on Milwaukee's economic and cultural development.

Today, the north side is predominantly African-American, though the outer reaches have more of a racial mix. It is often seen as a blighted Gangsterland (although the Near South Side and the northern part of the East Side are recent contenders). This is understandably a point of contention for many local residents, as the north side is a fairly large area with some middle-class residents; however, a number of neighborhoods are truly as bad as portrayed on the local news, where many of the stereotypes come from.

The original Kilbourntown settlement is now the western half of Downtown Milwaukee known as Westown (and sometimes referred to as "The West Side"). Marquette University, the oldest university in Milwaukee, is in this part of the city. It was also the scene of many of the infamous Jeffrey Dahmer murders.

Unlike the other two "sides," this is the only side that's almost never referred to as _____ Milwaukee or "The ____." Presumably, this hasn't caught on due to the existence of South Milwaukee, a completely separate town just south of Milwaukee's border, along with it having more separate suburbs than the north, which had the city basically swallow that area up in Milwaukee's last-gasp annexations of the 50's. It is also the hardest "side" to classify, as many neighborhoods that don't fit traditional south side definitions have emerged in the past two decades. Milwaukee's south side includes the following:

Milwaukee isn't generally known as a massive sports town, but it does host the MLB's Milwaukee Brewersnote A historically middling team who have become very strong competitors since the 2010's and the 2021 season NBA Champion Milwaukee Bucksnote where Kareem Abdul-Jabbar began his NBA career, and today the team of Giannis Antetokounmpo, and the local private Catholic school Marquette University is a college basketball power. Milwaukeeans' greatest sport loyalty, however, is generally regarded to be to a team that doesn't even play in their city. The Green Bay Packers play 100 miles north of the city, but they played some of their home games at the old County Stadium in Milwaukee every year until the mid-'90s. Because so many "cheeseheads" call Milwaukee home, the city remains treated as part of the team's "local market" by the NFL; it is subject to the same blackout rules as Green Bay proper, and most of the reporting on the team is done by Milwaukee papers.