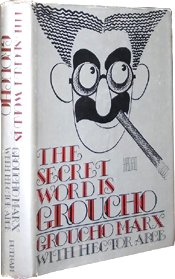 Oh, now EVERYBODY knows it!
Advertisement:

A secret word is frequently used in popular culture to provide tension and excitement. A minority of people know it, others don't and everyone is curious whether those who don't know it will find out what it is, or, how long it will take them? In certain stories the secret word may be a Trigger Phrase: once it's said a magic spell or hypnotic mind control device may change everything. In other stories a guard may only let someone enter a room unless the visitor says the secret word. See also The Password Is Always "Swordfish", Highly Visible Password (for tropes about obvious secret words) and Joe Sent Me (when a secret word has the variation "X sent me".)

In certain TV shows the audience is informed beforehand what the secret word for today is, while the panel members or contestants are unaware. During the show they have to guess it or, even more fun, are tricked into saying it. When the secret word is finally revealed to everybody the audience will laugh and cheer in excitement. He/She who said the secret word may win a prize or is considered to be the Butt-Monkey for that episode.

Secret words are also sometimes used during stage performances, as a sort of Inside Joke that either only the fans can get (and thus feel united by) or something that they can try to decipher as the show goes on.