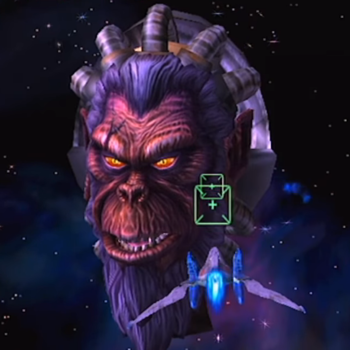 "The target is just a-head!"
Advertisement:

A fictional character or creature that is just a head (as opposed to a Waddling Head or someone who's recently lost their head) that can also fly, hover, or just get around under its own power.

Comes in a few artistic styles:

Not to be confused with Floating Head Syndrome.

After taking enough damage, Yaldabaoth's head detaches from its body and continues the fight.

After taking enough damage, Yaldabaoth's head detaches from its body and continues the fight.