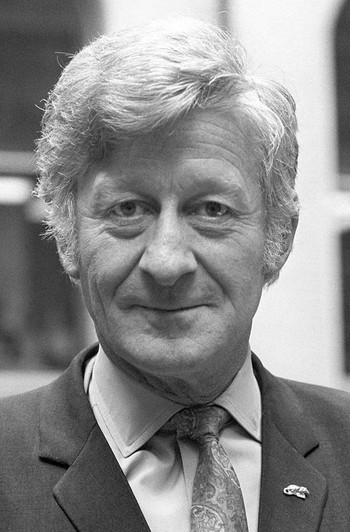 When Doctor Who needed a charismatic, James Bond-esque Action Hero, in stepped in Jon Pertwee
"I did all sorts. Teaching commandos how to use escapology equipment, compasses in brass buttons, secret maps in white cotton handkerchiefs, pipes you could smoke that also fired a .22 bullet. All sorts of incredible things. It suited me perfectly as I have always loved gadgets."
— Talking about his actual real life as a British spy
Advertisement:

John Devon Roland "Jon" Pertwee (7 July 1919 – 20 May 1996) was an English actor best known as the Third Doctor in Doctor Who, Pertwee from The Navy Lark, the title character in Worzel Gummidge and Captain Thrice in the first series of Lavender Castle. He was also an actual spy

, working undercover for Winston Churchill and alongside Ian Fleming (thereby becoming one of the real life bases for James freaking Bond) a fact he managed to keep hidden all his life and which finally came to light in 2013. Like his predecessor as the Doctor, Pertwee died of a heart attack while visiting the United States. His last TV appearance was in a Vodafone commercial for the UK, as a Lawyer-Friendly Cameo of the Doctor.

He was a huge fanboy of action movies and cool vehicles, which is why his tenure as the Doctor was essentially a serialised action movie. He eventually decided to leave the show after the departures of script editor Terrance Dicks, producer Barry Letts, and Katy Manning (Jo Grant), which happened around the same time as the death of Roger Delgado (The Master). He fulfilled the last year of his contract and developed a good working relationship with new companion Elisabeth Sladen (Sarah Jane), and left at the end of Doctor Who's 11th season in 1974. At five seasons over four-and-a-half years in the role (1970-1974), he is currently the Doctor with the second-longest continuous televised tenure after Tom Baker.

He also had a massive nose, which is briefly parodied in The End of Time Part Two with the newly regenerated Eleventh Doctor noting that "[he's] had worse" in terms of nose sizes.

He was the only Doctor (so far) who came up with his own sung Theme Song, titled "Who is the Doctor?". He also commissioned the Fan Nicknamed "Whomobile", which was used in two episodes and kept by Pertwee as his private Improbably Cool Car. After the classic series ended, he played the Doctor in the Third Doctor Radio Dramas (one of which actually used the word "Whomobile" in-story). He appeared once more as the Doctor in a fan project called Devious, which has inexplicably been in Development Hell since 1995.

His son, Sean Pertwee, is also an actor and bears a strong resemblance

◊ to his father to the point that many fans would love to see him reprise the role of the Third Doctor in the current iteration of Doctor Who, but Sean has gone on record saying that he views his father's portrayal of the Doctor as sacred and believes he shouldn't touch it. Sean has also related a story about a visit to the set for the revived 2005 series, when he did briefly consider auditioning. When he told some staff members who he was, they responded with indifference, apparently not recognizing either the surname or physical resemblance to someone. He did make a cameo in the 50th Anniversary parody The Five(ish) Doctors Reboot, where he and Olivia Colman wonder why they haven't been invited to be in the show's actual anniversary special.

I cross the void beyond the mind, the empty space that circles time. I see where others stumble blind, to seek the truth they never find. Eternal wisdom is my kind. I am the Doctor!