Film / The Adventures of Baron Munchausen 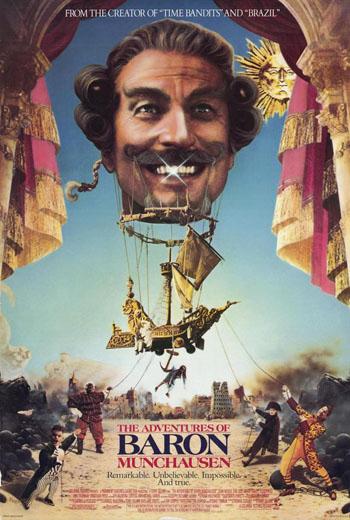 "Baron Munchausen, at your service! Most of you won't remember me or my adventures. But I assure you, they are true!"
"Everyone — who had a talent for it — lived Happily Ever After."
— Baron Munchausen
Advertisement:

Terry Gilliam's fourth solo directorial effort, from 1988 (though it didn't get released in the US and UK until a few months later in '89). It's a paean to whimsy and the irrational, and how stories are more important than "what really happened" and rationality.

It is the Age of Reason, and there's a war on. Somewhere Austria-y is at war with The Grand Turk. In a city on the border of this war, a rag-tag theatre company is staging a dramatic retelling of the life of famous Tall Tale teller Baron Munchausen. The play is interrupted by the real Baron, who describes what really happened to cause this war — namely, the Turks are after him. The Baron has come to the city to die, but is convinced by Sally Salt (the head of the theatre company's daughter) to instead save the city from the onslaught of The Grand Turk, as well as the forces of reason and mediocrity. Wackiness ensues.

The film is something of a Mind Screw, as the viewer is never really sure if what's happening is really happening — and whether or not that really matters. Due to a Troubled Production and a regime change at Columbia Pictures that discouraged giving it proper treatment, it was a notorious flop at the time. (The combined losses for this and Ishtar are what caused Columbia to merge with TriStar.) However, the film was a critical success and is still remembered as the final film in Gilliam's classic "Dreamer Trilogy", along with Time Bandits and Brazil.

Earned an Academy Award nomination for Visual Effects, but had the bad luck of being nominated the same year as The Abyss.

The film is sometimes considered a flop because it went wildly over budget and didn't make a profit, but part of the reason for that seems to be that the distributors had a change of management; as usual in such circumstances, the new guys had no faith in their predecessors' product and tried to bury it with poor marketing and few screenings.

Compare Münchhausen, a more faithful take on the source material made in Nazi Germany in 1943.

Example of:
The Burlesque of Venus