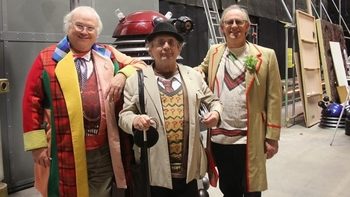 In which we get a high-def look at Colin's coat.
Advertisement:

The Five(ish) Doctors Reboot is a half-hour Web Original comedy short film written and directed by former Doctor Who star Peter Davison for the 50th anniversary of the show. It stars Davison and fellow former Doctors Colin Baker and Sylvester McCoy (with a brief appearance by Paul McGann) and revolves around the build-up to the 50th anniversary special "The Day of the Doctor", and features over 60 Who-related cameos. It was initially made available on the BBC Red Button service after the broadcast of the main special, and subsequently released on DVD as part of a 50th anniversary box set. It was made with the full cooperation of the Doctor Who production office, and features showrunner Steven Moffat in numerous scenes. John Barrowman, David Tennant, Matt Smith, Jenna Coleman and Russell T. Davies also appear (among about a dozen other Who alumni in cameos).

Down-on-his-luck '80s actor Peter Davison comes to the grim realization that the fiendish and ruthless Doctor Who show-runner Steven Moffat is not going to invite him to appear on "The Day of the Doctor". The fact that his two young sons are actually happy to hear this only intensifies an obsessive desire to relive his Glory Days one last time. He rounds up his old acting buddies Baker and McCoy, and the three retired Doctors set forth on a zany adventure: getting to the BBC studios in Cardiff and crashing the filming of "The Day of the Doctor" by any means necessary. Hilarity Ensues.

Can be viewed for UK viewers on the BBC website

. Americans and Australians (and the rest of the world, maybe — apparently it is blocked on certain ISPs and/or at certain times of the day) can view it elsewhere

. So far its only North American DVD release has been as part of a box set collecting the Matt Smith era of the series; in the UK it was included in a special set related to the 50th anniversary.