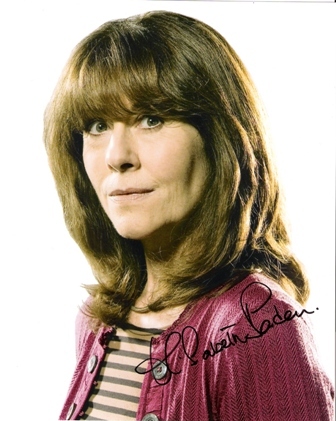 "What a legacy! That wonderful woman... the quintessential Doctor Who girl. I give her that title with absolutely no qualms at all."
— Katy Manning
Advertisement:

She got her start in primary school, although at the time her interest was ballet; in fact, she danced in one production with the famed Royal Ballet. Eventually, however, her sights turned to acting, and she made her first stage appearance as a corpse at the Liverpool Playhouse. She was subsequently scolded for giggling while onstage because the actor playing a doctor - one Brian Miller - whispered "respiration nil, Aston Villa two" in her ear. Incidentally, she married that young actor in 1968; they had one daughter, Sadie Miller.

Sladen joined Doctor Who in 1973 as the new companion to Third Doctor Jon Pertwee, following the departure of Katy Manning as Jo Grant. She remained with the programme for three and a half seasons, finally leaving two years into Tom Baker's run as the Fourth Doctor at the end of the serial The Hand of Fear. Her departure made front-page news; this was unprecedented, as until Sladen only a change of Doctors was announced in such a way.

After her departure from Who, Sladen made several one-off appearances as Sarah Jane, including charity specials, K-9 and Company (a pilot for proposed series) and the Big Finish audio series Sarah Jane Smith. She also did a considerable amount of theatre work, but went into semi-retirement following the birth of her daughter, restricting her work to occasional guest appearances on various television programmes.

In 2006, Doctor Who showrunner Russell T Davies made Sladen an offer she couldn't refuse, and Sarah Jane Smith at long last returned to Doctor Who proper in the episode "School Reunion". (Promoted Fanboy David Tennant, who had grown up loving Sarah Jane, could hardly contain his glee.) Sarah Jane was given the proper "goodbye" she had been waiting three decades for, and as fanboys and fangirls everywhere wept, the episode was paving the way for yet another generation of children to adore Lis Sladen. Her appearance alongside K-9 in the episode served to end speculation that had divided fandom as to whether or not the revived series was indeed a continuation of the original show. The success of the episode all but singlehandedly spawned The Sarah Jane Adventures, an ostensibly Lighter and Softer Spin-Off centered on Sarah Jane as she protects the world from an attic located in a rather lovely house on 13 Bannerman Road, Ealing, London, with the help of a gang of intrepid teenagers. The show managed to gain incredible critical and commercial success — and not just among its target audience.

That same show would see her meet not just the Tenth Doctor again (in "The Wedding of Sarah Jane Smith"), but the Eleventh (in "The Death of the Doctor"); she also made a return to DW proper in the two-parter "The Stolen Earth"/"Journey's End", which was the first and only major three-way crossover between Doctor Who, Sarah Jane and Torchwood. And "Enemy of the Bane" would see her reunited with good friend and fellow Who co-star Nicholas Courtney, the dear old Brigadier himself, Sir Alistair Gordon Lethbridge-Stewart, in that wonderful man's last appearance as his iconic and still-beloved character. Sladen made her final appearance on Doctor Who in "The End of Time Part 2" in 2010 as she made a cameo appearance to say goodbye to Tennant's Doctor.

The Sarah Jane Adventures earned critical raves and draws much the same audience as its parent programme; in fact, it regularly draws viewing figures almost unheard of for its time slot. Thank you, Russell T Davies.

Sladen has said that, although she greatly enjoyed working with Tom Baker, Jon Pertwee was "her" Doctor; when he died in 1996, she is reported to have cried inconsolably for weeks.

The fandom's collective hearts were almost audibly broken when, after fighting cancer, she died suddenly on 19 April 2011, barely two months after Nicholas Courtney fell to the same disease. She is survived by her husband and her daughter, and will be missed by millions of fans worldwide. The BBC dedicated the premiere of Series 6 of Doctor Who to her, and produced a special tribute to her: My Sarah Jane: A Tribute to Elisabeth Sladen

. Tom Baker, a man who does not often cry, cried muchly at the announcement of her death and has openly cried just mentioning her in interviews since then.

At the time of her death, Sladen had completed filming of the first half of Series 5 of The Sarah Jane Adventures. The production hiatus was not (as originally reported) due to her health issues as these were not known (even by Sladen) at the time, but due to budget. Upon her death, UK media reported that the BBC was considering continuing the series without her, like how Taggart continued on without Taggart himself, but it was rapidly realized this was unacceptable and the BBC announced soon after that Sarah Jane Adventures was cancelled. The six episodes Sladen completed aired in October 2011, bringing the series to a close. Ironically, the last episode to air during Sladen's lifetime was titled "Goodbye Sarah Jane Smith".

It has since been confirmed that, just prior to her death, Sladen had agreed to reunite with Tom Baker for a series of audio dramas for Big Finish Productions, with Davies giving the necessary approval, but her health never recovered. According to Doctor Who Magazine there was also a proposal for Baker to appear (as a character other than the Doctor) in a possible Halloween special episode of Sarah Jane.

Incidentally, after her death two fans known only as Gemma and Karen set up a JustGiving page to donate to Cancer Research UK in Lis Sladen's name. Within two weeks after her death, donations had topped £6,000 ($10,000).

The first new companion to be introduced into the series after her death, Clara Oswald, was named in tribute to the actress.

Her autobiography, titled simply Elisabeth Sladen: The Autobiography, was released on 7 November 2011, with a foreword by David Tennant. Sladen was in the final stages of finishing the manuscript when she died and the work was completed by her family.

Sarah Jane's impact — and by extension, Sladen's — on British culture and on Doctor Who as a series is difficult to overstate. She is, by popular acclaim, the most iconic and beloved Companion in history. In the same way that co-star Tom Baker will always be the archetypal classic Doctor even to those who have never seen an episode in their lives, Sarah Jane Smith will always be the archetypal classic Companion; as seen in the quote above from Katy Manning, even her contemporaries will relinquish that title to her. Her career resurgence is a testament not only to the lasting impact she had on the series and its fans, but to the talent and charm that made her departure headline news. Lis Sladen is gone, and yet never gone. Her legacy lives on forever in the episodes she did, in the mark she made on the series, and in the hearts of all who loved her. We are her legacy. In a quite literal sense, she is our Sarah Jane.

Rest in peace, Lis, and Godspeed. Never will you be forgotten.

And the story goes on... forever.

Works with pages on TV Tropes that she appeared in: