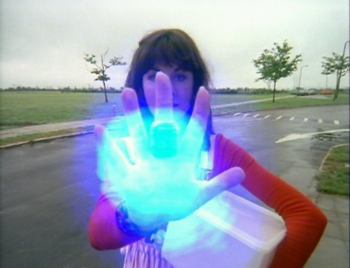 Sarah... ... ...that's not how you wear a ri- GAH MY EYES!
"I must be mad. I'm sick of being cold and wet and hypnotised left, right and centre. I'm sick of being shot at, savaged by bug eyed monsters, never knowing if I'm coming or going... or been... I want a bath, I want my hair washed, I just want to feel human again... and, boy, am I sick of that sonic screwdriver. I'm going to pack my goodies and I'm going home..."
— Sarah Jane Smith
Advertisement:

The one with talking rocks. Also the one where we say goodbye to a beloved character, but not forever.

The TARDIS lands in a quarry — it's not a quarry posing as an alien planet, but an actual quarry for a change - as the TARDIS is back in modern-day England. The Doctor thinks it's all very nice that there's a big siren to welcome them and a guy way in the distance seems to be happily waving at them. The quarry, of course, immediately explodes in a routine procedure, and Sarah Jane is buried under the rubble.

Before being rescued, Sarah touches what seems to be a fossilized hand and is taken over by the spirit of Eldrad, a Kastrian criminal punished by disintegration — but whose hand has survived, and whose spirit lives on inside the ring on its finger. Sarah takes the ring and goes to a nearby nuclear research station, with the Doctor and friends arriving a few minutes later. She uses the energy to help recreate Eldrad's body, absorbing all available nuclear energy. The Doctor and the resident lead scientist, Professor Watson, convince the RAF to bomb the place (after evacuating everyone). Eldrad isn't bothering, and appears in the form of a very beautiful, very confused woman. When she learns that hundreds of millions of years have passed since she crash-landed on Earth, she asks the Doctor to take her back in time, but he refuses. He does, however, agree to take her home to Kastria in the present. But when they arrive, there is only a dead planet and a mocking message from the last king of the Kastrians. Eldrad (now in a male body) is furious, turns out to be evil after all, and orders the Doctor to take him back to Earth so that he can rule there instead. The Doctor and Sarah trip Eldrad using the Doctor's scarf and the crystalline being falls into a crevasse and shatters.

Returning to the TARDIS, the Doctor is summoned to Gallifrey and, as he thinks that he can't take Sarah with him, he gives her a lift home to South Croydon. She was planning on leaving anyway, so although the farewell is bittersweet, she doesn't mind too much... only for her to realise, as he departs, that she doesn't recognise the street where he's left her. And that it's probably not even South Croydon. As we find out thirty years later, it was, in fact... Aberdeen. On the opposite end of the country.