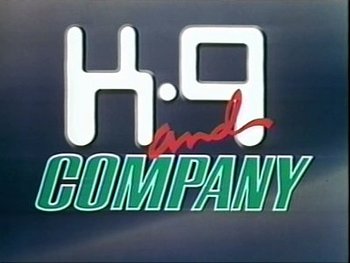 Hope you're in the mood for a lot of the countryside...
Advertisement:

The one that can't decide if it's for kids or not.

Airing on December 28, 1981, a week before Peter Davison's debut as the Fifth Doctor, this little special brought back Doctor Who fan favorites Sarah Jane Smith and K-9.

Although K-9 and Company was conceived as a spinoff of Doctor Who, it wasn't picked up, airing as a single special, also called "A Girl's Best Friend". Nonetheless, it is part of the Whoniverse Canon and many elements of it define the character of Sarah Jane Smith after her departure in "The Hand of Fear". More than 25 years later, a second, more successful spinoff for Sarah Jane was made in The Sarah Jane Adventures, with K-9 making occasional appearances. Subsequently, K-9 also got his own show. (However, some of these stories feature different K-9 robots - the K-9 of the solo series is Leela's K-9 last seen on TV in "The Invasion Of Time".)

Sarah Jane Smith spends the Christmas holiday at her Aunt Lavinia's house in Moreton Harwood to watch her ward, Brendan Richards. In the house, Sarah Jane spots a large crate that was left in the attic for a few years. Inside is K-9 Mark III, a present from the Doctornote A message which the Doctor actually means, for once. "Give Sarah Jane Smith my fondest love. Tell her I shall remember her always."

That's pretty much it really. Can you imagine what a full series would be like?

K-9 and Company provides examples of the following tropes: