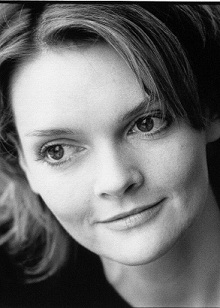 "I was asked 'How do you fancy playing a fat, ugly woman from London?'"note On being tapped for the part of Barbara Havers in The Inspector Lynley Mysteries
Advertisement:

Sharon Small (b. 31 March 1967 in Glasgow, Scotland) is a Scottish actress most famous for her starring roles as Detective Sergeant Barbara Havers on The Inspector Lynley Mysteries (opposite Nathaniel Parker) and Trudi Malloy on Mistresses. Subsequently she guest-starred on Downton Abbey, was featured on Kidnap & Ransom's second series, and co-starred opposite Jodie Whittaker in Trust Me.

Her lesser-known roles include Cara Rossi on Glasgow Kiss, Titania the Faery Queen in the ShakespeareRe-told episode "A Midsummer Night's Dream," and Dr Laura Maitland on Murderland. Guest credits include The Bill, New Tricks, Silent Witness, Call the Midwife and a trifecta of Scottish classics in Hamish Macbeth, Doctor Finlay, and Rebus.

She has also done work on film (About a Boy, Dear Frankie) and, much more notably, the stage (Lear, When Harry Met Sally, Men Should Weep), including work at the prestigious Donmar Warehouse and the Royal National Theatre. A talented actress who is always convincing no matter the role, fortunately after Mistresses and Downton Abbey, her star seems to be on the rise.

Her early drama training took place at Adam Smith College in Kircaldy, whose alumni include Ewan MacGregor and Dougray Scott; after completing that, she packed up and moved to London, graduating from the Mountview Academy of Theatre Arts in 1989. Fittingly for a native Scot, she made her television debut on Taggart.

A classically trained lyric soprano, she has also performed in, among others, The Threepenny Opera.