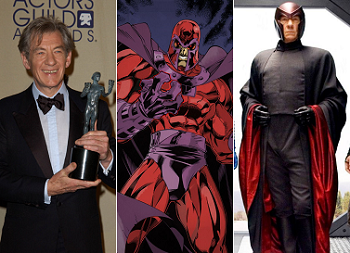 Well, who would you have cast as Magneto?
A bodybuilder who never took acting classes
or Sir Ian McKellen?
"If you have a chance to have a great actor in the part, everything else is irrelevant."
— Kenneth Branagh on casting Idris Elba as the Norse god Heimdall in Thor
Advertisement:

Directors and casting agents usually have very specific parameters in mind when choosing actors to play their characters. When holding auditions, there will often be descriptions of what the character should look like, noting features such as age, height, eye/hair color, and more. This is especially true for adaptations of pre-existing material, such as books and video games.

Sometimes, however, an actor who looks completely different from the specified description shows up and absolutely nails the audition. In such cases, casting directors may throw the description out the window and hire this actor purely based on their performance.

In addition to potential rewrites of the script, this may lead to tropes such as Adaptational Attractiveness, Adaptational Ugliness, Black Vikings, Hollywood Homely, Hollywood Pudgy, and Race Lift. In rare cases, it can even trump a character's original gender.

Compare Colorblind Casting, for when appearance isn't a factor in casting at all.

Note that it isn't an example of the trope if the actor works hard to resemble the physical description of the character.