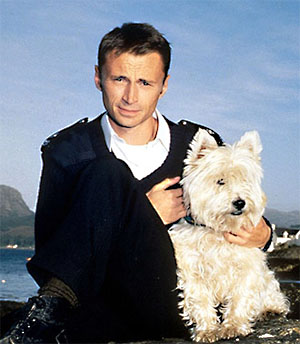 Based loosely on a series of novels by the same name, Hamish Macbeth follows the adventures of the titular character (Robert Carlyle), a constable assigned to the Scottish village of Lochdubh. While Hamish wants nothing more than to go fishing, take walks with his dog, and court his love interest, fate usually intervenes and forces him to actually do his job.

The villagers of Loch Dubh are the usual collection of Eccentric Townsfolk, and include TV John McIver (who claims to have premonitions), Lachlan McCrae (the obligatory get-rich-quick schemer) and his son Lachie Jnr (the obligatory schemer's obligatory useless sidekick), and Doc Brown (the local doctor, who even the eccentric villagers think is a bit odd).