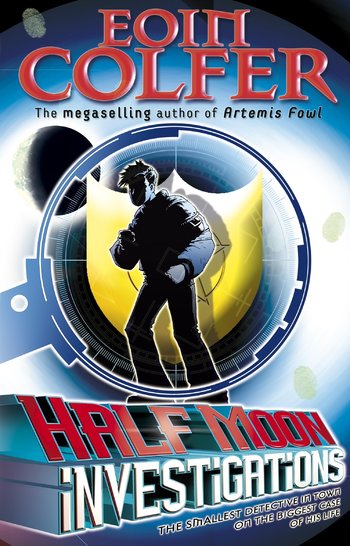 "My name is Fletcher Moon and I am a private detective. I've seen a lot of things that normal people never see. I've seen lunchboxes stripped of everything but fruit. I've seen counterfeit homework networks that operate in five countries, and I've seen truckloads of candy taken from babies. Up for a challenge?"
— Fletcher Moon
Advertisement:

Half Moon Investigations is a novel by Eoin Colfer, which has also been adapted into a BBC children's television series.

Half-pint schoolboy and fully qualified private investigator. Since graduating online, he has solved all sorts of minor mysteries at school and at home. It was only a matter of time before things got serious...

These are strange days in the town of Lock. There has been a spate of odd crimes, including the theft of something very special belonging to one April Devereux. Fletcher investigates – and the finger of suspicion is soon pointing firmly in the direction of the notorious Sharkey brothers, Herod and Red.

But nothing is quite as it seems. And, as Fletcher delves deeper, it‘s not long before the hunter becomes the hunted...