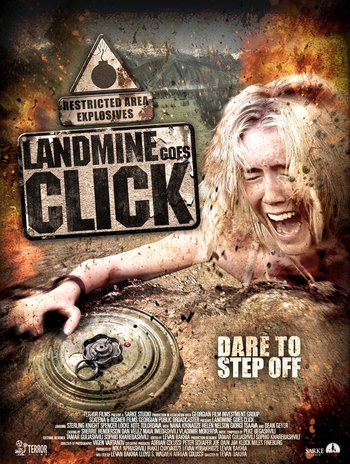 Land mines. Hundreds of thousands of them lie buried and forgotten around the world. One of the most dangerous and easy to deploy weapons of war, they can effectively deny an area from use for any purpose until they're cleared. They were considered so dangerous in World War II that the armies used special tanks equipped with massive rollers and chain whips to detonate them away from the tank's hull and clear a path through the field. Modern armies deploy everything from explosive counter-charges to remote-controlled robots to deal with these nasty things.

Thus, it's no surprise that mines turn up a lot in fiction. With any luck, they will be announced. But there is a major difference.

In Real Life, you probably won't know somebody stepped on a mine until they blow up.

In fiction, however, the squad will hear a tiny "click" as someone steps on the first mine, and we will have a tense moment while their friends try to figure out how to get the poor guy off of it without killing him. This usually involves finding a nice big rock to hold the button down while everybody runs for cover.

Another variant is to have a redshirt, a mook, or an otherwise expendable character step on one and have it detonate immediately, killing them. This is often followed by the survivors getting down on their hands and knees and carefully making their way out, probing the ground ahead with sticks and knives (especially in war stories). This is derived from Real Life military training on how to extract yourself from a minefield - except the part about using knives (or anything made of steel/iron): some of the larger (antitank) mines have magnetic-proximity triggers.

Very occasionally, you'll get both. It'll give an audible warning that it's been triggered, but that's no help to the victim — all they have time for is an Oh, Crap! reaction before he's pâté.

Many video games feature land mines with serious design problems, so it's quick and easy for a single main character to avoid or disarm them, unlike in real life. Such land mines might even feature flashing lights and beep a few seconds before they go off, which rather defeats the purpose.note Sort of. Part of a Minefield's purpose is area denial, so if seeing the land mines makes you stay away or find a different path, they're still doing their job.

In reality, most personnel mines will go off whether or not you release the button. Which makes sense, if you consider that a pressure-release trigger would be more complicated and more prone to failure. Also, the only benefit from a mine following this trope is that a group of soldiers are delayed trying to help their friend. If the landmine simply blows the poor guy's leg off, The Squad still has to tend to him, only now the explosion has tipped off any nearby defenders to intruders. That said, if the mine is a Bouncing Betty,

the most effective thing to do is dive and duck immediately to receive minimum damage from the shrapnel, as it mainly spreads horizontally (at roughly crotch-height, so even if it doesn’t cut you in half, you may end up wishing it did. Yikes).

Another fun fact about landmines is that they don't necessarily kill you. Antipersonnel mines are designed to maim rather than outright kill because wounded but still alive soldiers need to be evacuated from the battlefield, which costs more time and resources. A lot of people survive landmines with missing feet or legs... In fact, you're almost twice as likely to survive a landmine as not. So... yay?

A recent variation is a 'claymore' or directional mine. Rather than just blow up and hope someone's over it, these consist of a mounting plate, the explosive charge, and the soon-to-be shrapnel. The charge is set up so that the explosion fans shrapnel out in an arc in front of the mine, similar to a shotgun blast, rather than a general disorganized kaboom. It is important that the right side is facing the enemy, thus American versions have a large 'FRONT - TOWARD ENEMY' label embossed on them. These are usually set off by either a tripwire or a wired remote-trigger (which really does go 'click') in the hands of someone a safe distance away from the mine - so chances are, surviving the blast still leaves you in a gunfight with whoever just decided to try and blow you up...

Note that certain kind of land mines are now prohibited by an international treaty signed by many countries, notably not including the USA (who'd have a lot of digging to do in Korea if they agreed to get rid of all their landmines), Russia, China or India.

Subtrope of Kinetic Clicking, related to Dramatic Gun Cock. The non-Redshirt who hears the click under them will do whatever they can to invoke Where's the Kaboom?. Almost never comes up when dealing with a Sea Mine.