Film / Land of Mine 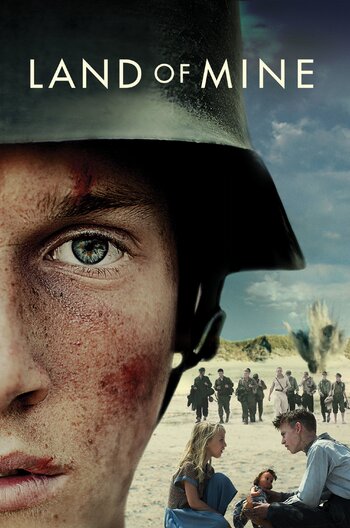 Land of Mine (Under Sandet, "Under the Sand") is a 2015 film from Denmark directed by Martin Sandvliet.

It is set in Denmark in May, 1945, in the immediate aftermath of the German surrender and the end of World War II in Europe. Untold thousands of German soldiers who were occupying Denmark (Germany held Denmark until the end) have surrendered as prisoners of war. Denmark is now free, but the nation has a serious problem. The Germans, anticipating the possibility that the Allies might land on the west coast of Denmark, have buried over two million mines along Denmark's entire North Sea coastline.

Sgt. Carl Rasmussen fought with the British During the War and is back with the Danish army in peace. He has been assigned a squad of fourteen German soldiers, all teenaged boys thanks to Germany's Lowered Recruiting Standards in the latter phase of the war and the fact that Denmark wasn't a combat zone anyway. The boys, under Rasmussen's supervision, have been assigned with demining a section of beach that is estimated to contain some 45,000 mines. It is extremely hazardous work, and the boys are given only a cursory training before they are on the beach removing mines.

Like almost everyone else in occupied Europe, Carl hates the Germans with a passion, and at first has no sympathy for the teenagers in his charge. But as he gets to know them, Sgt. Rasmussen and the boys in his squad form a bond.