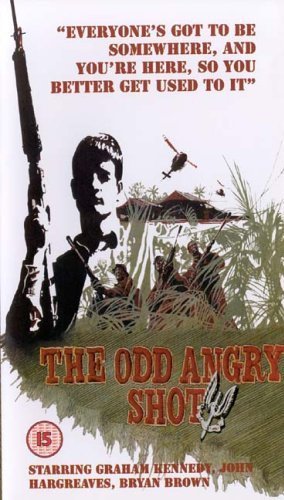 The movie about the Australian experience in The Vietnam War. What Gallipoli is to World War I, this film is to Vietnam

The Odd Angry Shot is an Australian 1979 war and action film with elements of comedy, which was written, directed and produced by Tom Jeffrey. It is based on the novel of the same name by William Nagel, and stars Graeme Kennedy, Bryan Brown, John Hargreaves, John Jarratt, Graeme Blundell, Ian Gilmour, and Richard Moir.

A group of Australian SAS regiment soldiers are deployed to Vietnam around 1967/8 and encounter the realities of war, from the numbing boredom of camp life and long range patrols, raids and ambushes where nothing happens, to the the terror of enduring mortar barrages from an unseen enemy. Men die and are crippled in combat by firefights and booby traps, soldiers kill and capture the enemy, gather intelligence and retake ground only to cede it again whilst battling against the bureaucracy and obstinacy of the conventional military hierarchy. In the end they return to civilization, forever changed by their experiences but glad to return to the life they once knew.