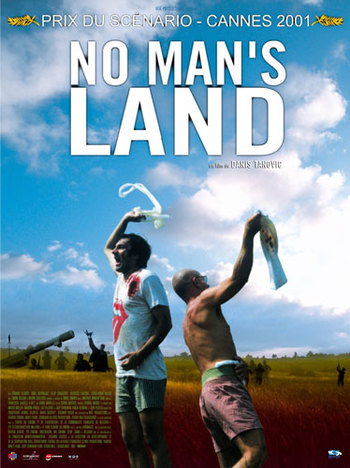 No Man's Land is a 2001 film from Bosnia and Herzegovina, directed by Danis Tanovic.

It is set in 1993 during the Bosnian war of independence. A Bosnian relief squad is trying to find its way to the front lines. They stop to rest during the night, only to wake at dawn and find out to their horror that they are in no-man's-land between the Bosnian and Serbian trenches. They are promptly mowed down by Serbian machine guns. Only one soldier, Ciki, makes it to temporary refuge in an abandoned trench, wounded but alive.

The Serbs send two soldiers, an older soldier and a newbie named Nino, to scout the situation. Ciki, hiding in a dugout, catches them by surprise, killing the older soldier and wounding Nino. The two enemy soldiers are left trapped together in the trench. Meanwhile, before the older soldier was killed, he set a booby trap mine underneath a Bosnian corpse. It turns out, however, that the corpse isn't a corpse, but a Bosnian soldier named Cira, who wakes up from unconsciousness and finds himself unable to move because of the bomb lying under his back.

Ciki and Nino trade insults and blame for the war as they wait for their respective sides to win the battle, but share small moments of empathy which leads to a unified attempt to save the dying Cira, trapped on the mine. Working together, they hatch a plan to signal both sides to cease fire long enough for a neutral U.N. peacekeeping unit to move in and rescue him. But as much as Ciki and Nino try to do the right thing, they find the truce in the trench is as fragile and volatile as the war around them.