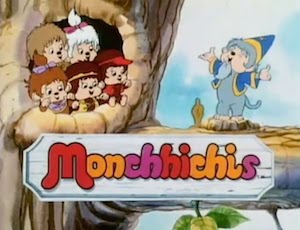 Hanna-Barbera produced this Saturday Morning Cartoon in 1983 for ABC, based on a line of Japanese dolls, as part of an hourlong omnibus with The Little Rascals and Richie Rich. The cartoon bore some resemblance to The Smurfs.
Advertisement:

The Monchhichis resided in the woodsy kingdom of Monchhia, under the rule of a benign wizard, Wizzar. This tribe of highly developed monkey-like creatures lived in the tops of very tall trees, high above the clouds. Their idyllic life was continually threatened by the gloomy Grumplins of nearby Grumplor, whose evil leader, Horgg, enjoyed being called "Your Loathsomeness" and "Your Nastiness". The wise Wizzar would often conjure up powerful spells to save the Monchhichis from the evil grasp of the Grumplins. Fortunately, the Monchhichis were smarter and more resourceful in their efforts to protect their treetop society.