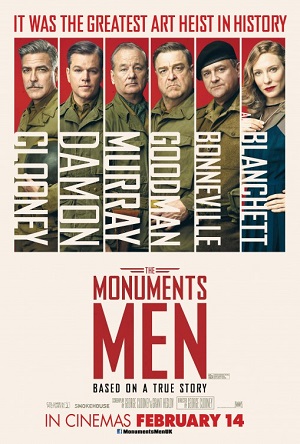 The Monuments Men is a 2014 War Movie directed by George Clooney and starring himself, Matt Damon, Bill Murray, John Goodman, Jean Dujardin, Bob Balaban, Hugh Bonneville, and Cate Blanchett. It is based on the history book The Monuments Men: Allied Heroes, Nazi Thieves and the Greatest Treasure Hunt in History by Robert M. Edsel. Alexandre Desplat composed the score.

The story involves the adventures of the US Army's World War II Monuments, Fine Arts, and Archives program, aka "The Monuments Men." They were a collection of various art experts who were tasked to minimize damage to works of art and fine architecture during combat and to find and recover as many as possible pieces of art stolen by the Nazis in their conquest of Europe.

To that task, Frank Stokes assembles an elite team of experts to accomplish this mission. However, they find their work complicated by their own combat units who hardly see the point of risking their own lives being delicate around art and the Nazis who determined to keep their loot or destroy it if they are defeated. Furthermore, they have to deal with natives like French curator Claire Simone who suspect the US wants to steal the art for themselves and the Soviets who definitely want to do that as reparations for the horrors they have suffered in that war.

This film is a clear Hollywood History dramatization of the story and anyone who wants to see a film for an accurate account should see the Documentary, The Rape of Europa.

The Monuments Men provides examples of: