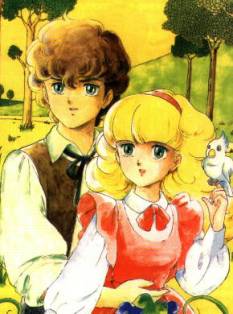 Alpen Rose (炎のアルペンローゼ・ジュディ＆ランディ, Honoo no Arupen Rōze a.k.a. Blazing Alpen Rose) is a shōjo manga series created by Michiyo Akaishi. It ran in Shogakukan's Ciao from 1983 to 1986, later was gathered in nine short volumes, and then it was re-released during The '90s in four volumes. It's actually the only of Akaishi's mangas made into an anime, which was done in The '80s and reached quite the success in Europe and some Arabic countries; it has music by Joe Hisaishi and designs by Akemi Takada. The 20 episodes of the TV series would later be recopilated and mixed into two movies.

The main characters are two teenagers named Lundi and Jeudi. Lundi Cortot is a boy who lives in Switzerland with his aunt and uncle in 1932, few years before World War II; in these days, he and his family find a little girl in a dandelion plain, and they take her in alongside her cockatoo Printemps. Since she can't remember anything about her past, they rename her Jeudi and raise her for a while until she's taken in by a nearby store (manga) or a nursery school (anime).

Fast forward to 1939, few after the Austrian Anschluss and a little before Switzerland declares its neutrality. Lundi and Jeudi are already teenagers, but Jeudi is still amnesiac; her only clue about her identity is a song that repeats itself in her memories, whose name is apparently Alpen Rose. And then, a strange man named Count Germont appears and attempts to kidnap Jeudi! When she refuses to become his mistress and is pretty much locked in the castle as a maid, Lundi rescues her and they run away from home, setting out in a journey to find the answers to all of their questions, as well as falling in love in the process...

Honoo no Alpen Rose provides examples of the following tropes: