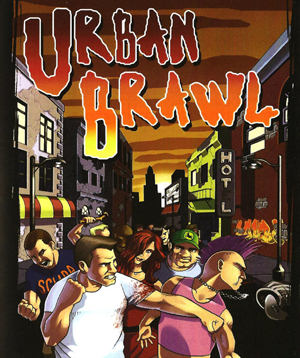 A sequel to a Doom II Game Mod, made by Stephen "Scuba Steve" Browning, but this time released as a standalone game. It's available as a freeware download, but it was also released in a boxed version, which includes some extra goodies. As of now, the bonus levels included in the boxed version are now free to download off of the main site.

While the original Action Doom was an attempt to bring Contra-like mechanics to first person perspective, Urban Brawl is a nod to beat 'em ups like Double Dragon. You have a pistol, but most of the time, you'll end up fighting with melee weapons like two-by-fours, bottles or pool cues.

The game puts you as a grizzled veteran, living in a desolate, crime-filled quarter of the city, with only your daughter to keep you company and bring a point to your life. When she gets taken away by henchmen working for an unknown boss, you set on a quest to find her, learn about the people who took her and take revenge on those responsible, while beating up tons of criminals along the way. Although short, the game offers multiple paths to take and a lot of secrets.

Its homepage is here

. An add-on, Dead of Winter, was released

in January 2014. A Reloaded version was released

in August 2021, which is tweaked for modern hardware (it's now designed to run on GZDoom) and gave the protagonist some new abilities like throwing.