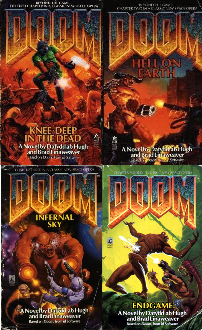 The Doom series is a 1995 collection of novels written by Dafydd ab Hugh and Brad Linaweaver.

Yes, somebody wrote a series of novels based on Doom. Yes, that Doom.

Knee-Deep in the Dead is the adaptation of the first game. Corporal Flynn "Fly" Taggart is a US Marine fighting terrorists in Afghanistan when he punches out his lieutenant to prevent a massacre. He's arrested and pending court martial, but the next day his company is shipped to Mars to investigate a distress call from the Union Aerospace Corporation. Fly listens in horror to his comrades and friends being killed by unknown enemy forces. He takes down his guards and, armed with only a pistol, enters the mining facility to save his friend PFC Arlene Sanders.

Cue the "demons", Satanic architecture, and ultra-violence. Fly and Arlene slog their way through Phobos and Deimos fighting armies of demonic-styled alien monsters.

Hell on Earth is the adaptation of Doom II. The aliens have arrived on Earth and the world governments have collapsed. Fly and Arlene crash land a rocket from Deimos and meet with one of the last bastions of resistance: Salt Lake City. They join with a Mormon sniper, Albert, and a teenage hacker, Jill Lovelace, on a mission to steal enemy intelligence from Los Angeles and deliver it to the resistance military base in Hawaii.

Infernal Sky is where the novels start to jump off the rails. Fly, Arlene, and Albert have a new mission with a new member, Esteban Hidalgo, to return to Phobos. Friendly aliens have made contact and a Gate on the moon will allow the team to meet the aliens in person. The masterminds behind the "demons" are revealed: a race of broccoli-like aliens nicknamed "the Freds".

Endgame is when the novels almost completely abandon the Doom franchise. Fly and Arlene have been shanghaied on a one-way, suicide visit to the Fred home world. On arrival they find that the Freds have been wiped out. The pair finds a member of the race that killed the Freds and try to regroup with the rest of humanity.

While they are both adaptations of the video game, the novels are a completely different beast from the comic. There is no RIP AND TEAR here.