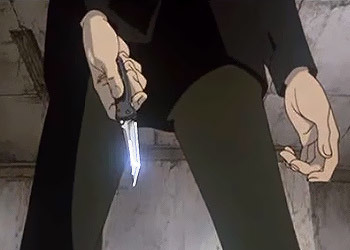 Click!
"When Eddie said he didn't like his teddy you knew he was a no-good kid.
But when he threatened your life with a switchblade knife..."
— Chorus, "Eddie", The Rocky Horror Picture Show
Advertisement:

When it comes to planning out the weaponry of a story, Good Weapon, Evil Weapon never fails to display itself. That said, the switchblade gets a particularly bad rep. The small size, concealability, and razor-sharp edge make it almost impossible for the poor weapon to be seen in a positive light. This is especially the case with "stiletto" switchblade, named for the similarly shaped dagger. Gangsters scare their targets (and the viewers) with a single flick of their blades, and assassins slit the throats of unsuspecting victims who barely have time to hear the click sound given off by the weapon.

As the above states, when this trope is applied, almost always expect it to be the iconic Italian Stilleto Switchblade.

In real life, a lot of countries ban or severely restrict switchblades, flick knives, and similar weapons such as butterfly knives. These weapons have such a bad reputation that even countries that allow more conventional knives to be carried without restriction have laws against them. The actual effects of the legislation range from prohibiting the use of switchblades to anyone outside the military (Hungary) to banning all switchblades with blades longer than a few centimeters (Japan) to adding specific clauses to laws that distinguish between "tools" and "weapons" that always prohibit them no matter what (Canada) to banning the sale, use, or transport of the knives altogether (The Netherlands). It's too the point that even countries that allow you to own and even carry blades that could be far more deadly like butcher's knives or used in the exact same manner like straight razors nevertheless ban switchblades.