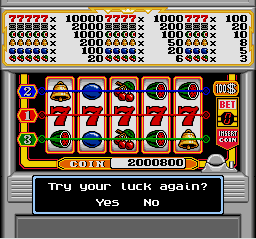 Some players spend more time trying to get this than they do on the gameplay itself.
"Remember kids, gambling is good for you!"
— Pegasus, Yu-Gi-Oh! The Abridged Series Episode 4
Advertisement:

Optional gambling mini-game that has the player wagering in-game money on a game of chance. This can range from games based entirely on random chance (e.g. slots, roulette) to competitions involving some degree of skill (e.g. card battling), although an element of luck is invariably involved.

Gamers will often exploit these mini-games by saving, setting themselves up for a huge payoff (such as by betting their entire savings on a longshot), and reloading until they win. Developers often attempt to discourage this behavior by limiting the amount of maximum bids to a reasonable level, but by then it's usually not worth bothering, as you could probably profit faster merely by going outside and slaughtering random monsters. Alternatively, some games will save the outcome of the bet before revealing it to the player, rendering cheating in this fashion too complicated to bother with in most cases.

So, in summation, if you're playing an RPG, odds are it has a betting mini-game somewhere. Often kept in one big area, for your convenience. And note that this doesn't apply to actual gambling and casino games, because, well, that's expected from them. Almost mandatory for a game with a Luck Stat.

In games where gambling currency is distinct from the standard currency won from regular battles, there is often a character or machine willing to convert between the two types of currency, though the exchange rate is usually less than favorable. This is done to discourage the raising of funds via gambling and save scumming rather than actual combat.

One of the minigames Larry can play to get more money is blackjack.

One of the minigames Larry can play to get more money is blackjack.