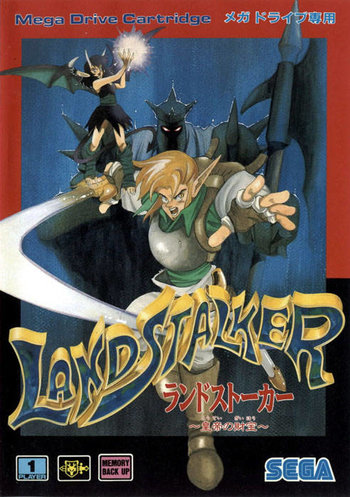 Landstalker: The Treasures of King Nole is an action-adventure RPG on the Sega Genesis, in the same vein as The Legend of Zelda, from Climax Entertainment (which co-developed Shining in the Darkness and the first Shining Force with Camelot Software Planning). Released in the US during 1993 ('92 in Japan) and although it wasn't what anyone would call a smashing success, it is fondly remembered and gained a decent sized cult following.

The basis of the story rounds out like this: you are Nigel, a masterful treasure hunting (some would say, 'thief') elf who is given information about a great treasure buried under an island from a fairy - who although, doesn't necessarily know where they are on the island knows that they have to be there, and a after a little convincing - the two buddy up and begin the quest.

During said quest, you'll come across all manner of classic fantasy creatures, ranging from winged demons, talking...bears, more fairies, not-so-evil-Wizards, skeletons, orcs, etc. The big difference for the time was the perspective; Landstalker plays out entirely in an isometric view (think of the basic viewpoint for most Tactical RPG's and you'll get the idea). The novelty of it is that it makes the core aspect of puzzle solving rather difficult at various times since you can't alter the angle at which you see the world. This would also make for some extremely punishing platforming as Nigel doesn't leave a shadow (landing jumps at later sequences becomes mostly trial and error). As noted, the biggest chunk of this game is in a myriad of puzzles to solve in the dungeons, ranging from laughably easy to mind-breakingly difficult; the smoothness of control however still made gameplay quite fun.

The biggest draw of the story is a subtle atmosphere of goofiness. Nigel's more than a bit of a Chick Magnet - he meets hamster girls, six-inch tall fairies, and bitchy princesses, all who just can't resist him.

It was scheduled for a remake on the PlayStation Portable, but was canceled for reasons unknown. It has at least two direct Spiritual Successors - Dark Savior (from Climax - for the Saturn), and Alundra (not in isometric view anymore, making it more Zelda-esque - but felt very much like it, from Matrix Software for the PSone, a company comprised of members formerly from Climax) and one Distaff Counterpart in Lady Stalker for its rival. Nigel and Friday were also featured as playable characters in the Sega Dreamcast game; Time Stalkers - alongside a smattering of other Climax characters. It also now available to download on the Wii's Virtual Console, as well as the Sega Genesis Classics collection for the PlayStation 4, Xbox One and Nintendo Switch.