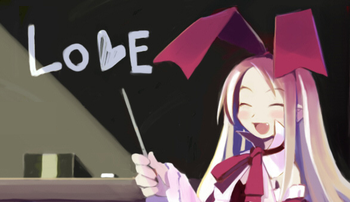 You know when someone is said to be In Love with Love? These people take it to a literal level.

The Love Freak is obsessed with the very concept of love. Often spouting dialogue about The Power of Love and justice, this character is naive and lacks common sense; her (it’s usually a her) determination is usually the only thing keeping her from being completely incompetent (even if she is potentially very powerful).

How satirically this character is portrayed depends on the mood and personality of the lead, although writers typically design her to be somewhat sympathetic. Nonetheless, it is difficult for the other characters to really dislike her because she is honestly nice and a loyal friend.

Somewhat like the All-Loving Hero, but not as charismatic or as effective, placing this character in a supporting role 99% of the time. May admire the Knight Templar at first and continue to do so if the Templar is not portrayed negatively. Occasionally, she may even be the Knight Templar who's determined to spread love, all around the world, at any cost. Worst case scenario, she's an outright hypocrite who's just as sneaky and/or outright violent as the wickedness she supposedly fights.

See also The Pollyanna, Naïve Everygirl, Stupid Good, Shipper on Deck. Occasionally has problems if they're forced to be a Reluctant Warrior.

Not to be confused with the other type of Love Freak.

for those alone in blackest night,

accept our ring and join our fight.

LOVE CONQUERS ALL WITH VIOLET LIGHT!”

Zombizou's primary motivation is to spread hugs and kisses.

Zombizou's primary motivation is to spread hugs and kisses.