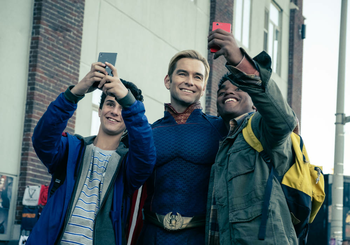 This trope is when the hero is famous. By the nature of going and saving the city, of course they would be known by everybody and be in the news all the time, but this hero takes it a step further. They will give interviews, sign autographs, maybe even get paid to sponsor products. Most of the time in these cases the hero doesn't have a secret identity, and just presents himself as the hero all the time.

Oftentimes this type of hero is given the same feet of clay that actual celebrities tend to be; for instance, caring more about their image than about actually saving people. However, don't rule out the possibility of a Jerk with a Heart of Gold.

See also Corporate-Sponsored Superhero, in which superhero life is what makes him/her famous. For cases on the other side of the law, see Villain with Good Publicity.

Sister trope of Celebrity Masquerade, in which being the big star is the secret identity for a superhero.