Webcomic / Wake of the Clash 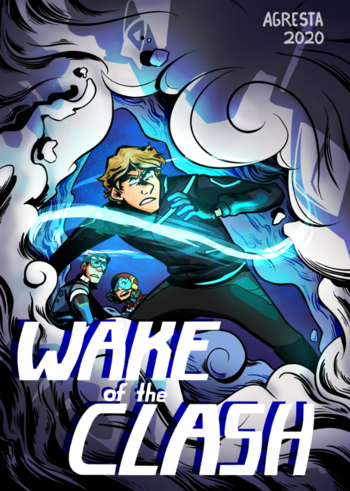 Chapter 3 Cover of Wake of the Clash featuring Ghost(front), Racer(back left), Airstrike(back right), and Clash’s shadow(above)
"It is the mark of a true hero… to inspire trust… to be compassionate… and act with only the truest motive… the truest desire… to do good for goodness’ sake."
Advertisement:

Wake of the Clash

is an ongoing page-a-week superhero Webcomic written and drawn by Yoshiko Agresta (yoyoyoshiko), first uploaded in 2019 on Tapas and Smackjeeves, and later to Webtoons.

The story is centered around a young man, Liam “Ghost” Durand, who was once the sidekick of Beacon City’s most loved hero. Eight years prior to the main events, Liam witnessed his mentor lose control at the hands of an unknown villain and destroy much of the city’s serene waterfront district, permanently changing the world of superheroes before vanishing. Now Liam finds himself on a less-than-solo hunt for his former father figure alongside his super-friends Airstrike and Racer.

Wake of the Clash swings between the comedic and dramatic sides of superhero comics, and places its more bombastic, hopeful heroes right alongside more cynical ones.

Wake of the Clash contains examples of: