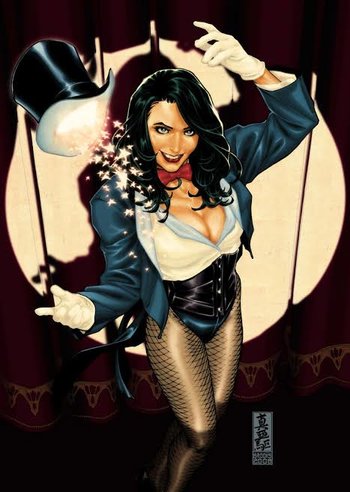 "89% of magic tricks are not magic. Technically, they are sorcery."
— The Fact Core, Portal 2
Advertisement:

Characters of the first kind stereotypically wear robes and pointy hats, have long white beards, and can perform impossible feats such as raising the dead, casting spells, and summoning fabulous creatures. We call these kinds of characters wizards or sorcerers (among other things), and they don't exist in Real Lifenote at least, not anymore, or, that's what we think. Characters of the second kind wear capes and top hats, usually perform their acts before a wide audience, (or a children's birthday party) and can perform simpler tricks like pulling rabbits out of their hats. We call these kinds of characters stage magicians, conjurers or illusionists, and they do exist in Real Life. Their magic is not real; they use misdirection, special effects and optical illusions to create the impression of magic. As Lee Siegel

says, "'Real magic', in other words, refers to the magic that's not real, while the magic that is real, that can actually be done, is not real magic."

Sometimes, in fiction, the lines between realism and fantasy blur, and magicians really can perform feats of magic that would normally belong strictly in the wizards' territory. There are no smoke and mirrors here; the magic is all real, but the audience may not realize this, and think that the magician is relying on the same old sleights-of-hand. There may be subtle differences — their magic may come from a different source, and/or the two groups may operate at different Power Levels (perhaps magicians can perform spells based on manipulating people's perception, whereas wizards can outright modify reality). If there is rivalry between the two factions, it falls under Unequal Rites. If a legitimate wizard really does use his magic for a magic show, then it's a Mundane Utility. If he uses it only for his show, then it may be an example of Misapplied Phlebotinum.

In other words, some Magicians Are Wizards. See also Magitek which in this case can be called "Engineers are wizards" because they make magical technology. If the wizard-magician hopes no one realizes that real wizards exist, his act is an example of Fiction as Cover-Up. When the Fourth Wall audience (you, the viewer or reader) isn't sure, it's a case of Maybe Magic, Maybe Mundane.

The opposite of Fake Wizardry, where someone uses stage magic to pretend to have actual magic powers. Compare Our Mages Are Different for differentiating kinds of mages (especially the first kind mentioned above), Magical Clown, which involves clowns and jesters instead of stage magicians, and Circus of Magic, where an entire circus is magical. Contrast Magician Detective, where training in the art of deception have given magicians an ability to see the mundane solution when no-one else can. Subtrope of this is the Occult Detective. Contrast Impossibly Awesome Magic Trick, which is supposedly not true magic, yet is more spectacular than anything possible in real life.

Alternative Title(s): All Magicians Are Wizards