"First it's a mouse who talks in rhyme, and then a computer, not to mention the mannequin upstairs with the magic hat running around!"
—Sam Crenshaw, a "normal human" character... played by a puppet. 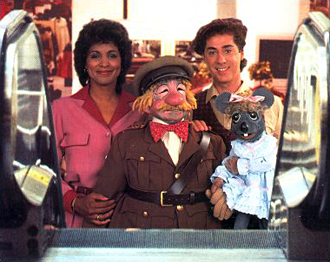 From left to right: Jodie, Sam, Jeff and Muffy.
Advertisement:

A Canadian children's TV series that ran from 1981 to 1987 and was originally produced for TVOntario. It is best remembered in the U.S. for being one of the earliest staples of Nickelodeon's lineup — and at times, for being really freakin' weird.

The setting was a department store quite clearly set in Toronto, where the show was filmed. The show centered around the characters (human and otherwise) who worked there during the overnight shift. The employees of the store included Jodie, who set up the displays in the children's department, Sam Crenshaw the security guard (played by a puppet), and Mrs. Pennypacker (another puppet introduced in one of the later seasons). They were joined by the far stranger nocturnal residents of the store: Jeff the mannequin, Muffy Mouse (another puppet), who spoke in rhyme and had a little penthouse within the store, and TXL Series 4, Sam's Do Anything Computer and who also plays quizzes and participation games with the viewers in between segments. Another character in the show is the Mime Lady. While she is not an in-store character, she participates in TXL's games.

The aforementioned Jeff is such an unusual character, he deserves his own paragraphs. Every kid's show has an obligatory character meant to be the young audience's representative in the show's fictional world, but Jeff was an especially bizarre example. He is a mannequin, in the shape of an adult man, who was brought to life by wearing a magical hat created by a magician named Waldo The Magnificent. Thing is, his personality and mannerisms were that of a small child. So in other words, this show's Big Bird equivalent was a Manchild who lived in the store and was taught about everyday things and the world in general (ie, in one episode, the other regulars had to explain to Jeff what brooms were for, and in another, how umbrellas work).

Being a bit of a Cuckoolander, Jeff also had to be reminded not to remove his own hat, as this turns him back into a mannequin. Fortunately, saying the magic words "Hocus Pocus Alamagocus" brings him back to life. Unfortunately, Jeff could never leave the store, due to the conditions of the magical hat (it only works inside the store). In some episodes, it is said that if he ever stepped foot off the store grounds, he would stay a mannequin forever (but not always; it should be noted that the "rules" of the hat were fairly inconsistent). Any episodes that took place outdoors had to provide a Hand Wave to work around this.

For a certain generation of young adults, this show often comes right after Zoobilee Zoo and/or The Noozles in conversations that start, "Oh my God, do you remember...?"

More information can be found at this very extensive fansite