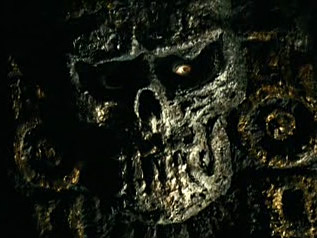 I spy with my little eye.
"If you're peering out from one of those it's a safe bet that meddling kids will soon cause you not to get away with something."
— Mike Nelson, RiffTrax of Indiana Jones and the Kingdom of the Crystal Skull
Advertisement:

While visiting a Haunted House, someone sees the eyes of a creepy portrait painting seem to follow them. The other members of the party blame it on nerves, when in fact, the villain really is spying on our heroes through peepholes in the eyes of the portrait.

There also exists a variation on this trope where a good character ends up spying on the villains through an opening or openings in a wall that turns out to be an eyehole or eyeholes on a portrait from the other side of the wall.