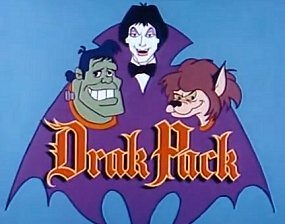 "WHACKO!" - Frankie, Drak Jr., and Howler
From the monsters of the past, comes a new generation, dedicated to erasing the evil image of their forefathers...
- from the Opening Narration
Advertisement:

Hanna-Barbera created Drak Pack in 1980, consisting of Frankie, Howler, and Drak Jr., three teenage boys who were capable of turning into a Frankenstein's Monster, a Werewolf, and a Vampire. As a Vampire, Drak Jr. (exclusively referred to simply as "Drak" in the series itself) is capable of shapeshifting, telekinesis, and flight. Frankie is extremely strong and becomes even stronger when he's angry (or when he sneezes), and since he's green in this form, he brings to mind the Incredible Hulk. Howler has super breath like the Big Bad Wolf, and his howl is ultrasonic and can shatter glass. Their boss is Drak's uncle, Count Dracula, known affectionately by the trio as Big D. And of course, they use their powers for good, instead of evil.

Their primary antagonists are O.G.R.E., the Organization of Generally Rotten Enterprises, headed by the diabolical Dr. Dred, along with his henchmen: Toad, Fly, Mummy Man, and Vampira.