Recap / My Little Pony: Friendship Is Magic S8 E14 "A Matter of Principals" 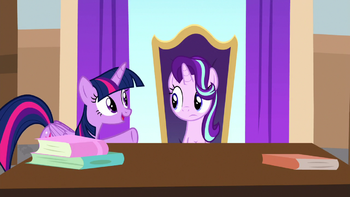 "You're a good leader and an expert in friendship. I trust you to run this school exactly as I would."
— Twilight Sparkle
Written by Nicole Dubuc
Advertisement:

Twilight Sparkle is preparing the students for a scavenger hunt, to locate six artifacts from the various Equestrian species she will hide around the school, when her cutie mark starts glowing. She meets the other Mane Six at the cutie map, all to find them summoned by the map to a far-distance location outside Equestria. Twilight realizes that this will leave the school with no teachers, and institutes a backup plan — putting Starlight Glimmer as the temporary headmare, with Spike's help, to run the school in their absence.

As the Mane Six depart, Starlight and Spike find Discord is there too. Discord is upset that Twilight didn't ask him to help run the school, but before he can take over, Starlight asserts she's going to follow the lists that Twilight left, as she doesn't want to let Twilight down. Discord seems to accept this, but Spike knows that Discord will likely cause a ruckus. The next day, they find Discord has hired temporary staff, all ill-fit for their teaching duties, such as Iron Will for friendship lessons. Starlight reprimands Discord, tells him to leave her alone, and replaces his hires with competent ponies. However, Discord still manages to cause disruption in the classes with his chaos. Starlight approaches Discord, but he refuses to recognize Starlight as the headmare, leading Starlight to hit him with powerful magic that permanently banishes him from the school.

The next day, Starlight is prepared to start the scavenger hunt, assigning the students in pairs. As the students look for the artifacts, Discord, in a more ghostly form, still manages to cause havoc by appearing to make the school haunted and scaring the students. Starlight witnesses all this from observing the students and realizes she was far too harsh on Discord. Before he can cause more trouble, Starlight returns his body to him, apologizes, and offers to make him the vice-principal for the school so that he can help. Just as Discord is ready to start, the Mane Six return, having discovered that Discord purposely tricked them away from the school for a few days. After assuring that all is well, Twilight tells Starlight she did a good job, even with dealing with Discord.