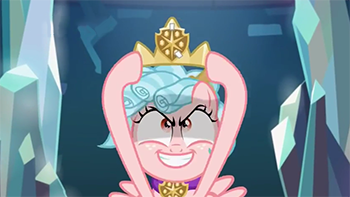 Who's been messing up everything?note It's been Cozy Glow all along!
"All of Equestria will bow to me!
The future Empress of Friendship!"
Written by Nicole Dubuc
Advertisement:

As a self-appointed assistant to Twilight, Cozy Glow goes about her rounds to help out the various students at Twilight's school, and reminds Twilight that many of the students have gone with Rainbow Dash and Starlight Glimmer to tour Cloudsdale. In the clouds, the non-pegasi students enjoy walking on the clouds with the help of a spell cast by Starlight, but suddenly the spell gives way, causing several students to fall through the clouds. The flyers quickly save the falling students, and they make their way back to the school. Twilight and Rarity find their own magic failing, and as they consider possible solutions, Cozy suggests it may be Tirek. Spike, whose fire breath is also having problems, coughs up a letter from Celestia, requiring Twilight and her friends to come at once to Canterlot. There, they learn from Celestia, Luna, and Cadance that the magic drain is affecting all of Equestria, and a letter from Star Swirl warns that if they cannot stop the drain in three days, all magic in Equestria will fail. They agree that they should go to Tartarus and check to see if this is Tirek's fault.

Twilight and her friends prepare to leave the school, with Twilight leaving Starlight in charge. Cozy is a bit surprised, but quickly offers to help Starlight with lesson plans. The Mane 6 and Spike travel to Tartarus, and while the lack of magic makes the trip somewhat miserable, the others are able to help out. They arrive at the doors to Tartarus, but they need magic to open; fortunately, Spike finds that Cozy had packed an artifact for Twilight that can be used to open any door, but breaks after use. Once inside, the door shuts behind them, and they come face to face with the cockatrice. However, Fluttershy sees that the cocktrice, like several other magical creatures within Tartarus, have lost their powers too, part of the magic drain. With Fluttershy helping to calm Cerberus, they go to see Tirek, who appears to have been expecting them.

At the school the next day, the students are surprised that Starlight is not there; Cozy explains that she had to go on her own quest and had put Cozy in charge. Cozy offers up lots of goodies for the school, which makes Sandbar and his non-pony friends doubtful of her intent. When Cozy assigns them additional homework for being grumps, they decide to make it a homework party in the library that night. As they are studying, they spot Cozy emerging from the catacombs, and decide to follow her. She goes to the headmare's office, and as the students peak in, are surprised to see Chancellor Neighsay there. Neighsay is furious to learn that Twilight abandoned the safety of the students in a time of need, while Cozy asserts that everything is fine. He refuses to accept that they left Cozy in charge, just as they hear the students eavesdropping outside. Neighsay, still believing the non-ponies to be a threat, ties them up and locks them in a dorm room, but just before he leaves, Sandbar asserts he doesn't want to be part of the non-pony group anymore, and Neighsay lets him go. Sandbar sneaks out of the school and makes his way to Sweet Apple Acres as to get the help of the Cutie Mark Crusaders. Once in tow, Sandbar and the Crusaders sneak back into the school and enter the catacombs.

At Tartarus, Twilight grills Tirek on what he knows about the magical drain. He admits that he told his penpal protege what needed to be done to drain magic. The ponies demand to know who this was, and he admits that it was Cozy Glow.

At the school, Sandbar and the Crusaders see that Cozy has used the six magic relics from the Equestria races to create a sphere of concentrated magic, which Starlight is trapped in. Cozy admits she had to push Starlight in to get her out of the way and may need to do the same with Neighsay. She goes on to rant that she has learned that friendship is power, and by getting Twilight and her friends out of the way, and anypony else that may stop her, she will become the Empress of Friendship and cackles evilly.