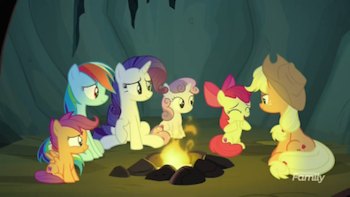 Applejack, Rarity, and Rainbow Dash are taking the Cutie Mark Crusaders on their annual Big Sister-Little Sister camping trip to Winsome Falls. As they are setting up tents for the night and prepare to partake in a picnic, they are interrupted by a swarm of fly-ders, which quickly cover their campsite in webbing and bite the ponies. They all quickly take shelter in the nearby cave — though Scootaloo needs a bit of coaxing to get over her fears of it from last time.

As they settle in the cave, hoping the fly-der swarm will pass, Applejack suggests they tell stories to pass the time, and offers one she has told to Apple Bloom before, the legend of Rockhoof. In a Nordic village, Rockhoof was a scrawny stallion that wanted to join the Mighty Helm, warriors that protected the land, but he was deemed too weak to join. One day, the volcano near their village erupted, with the lava threatening to wipe it away. While the Mighty Helm decided it would be best to evacuate the village, the villagers didn't want to leave. Rockhoof decided to try to dig a trench to divert the lava. While doing so, he was filled with magic, causing him to grow larger and stronger. He was able to complete the trench in time to save the village, and for his valor, he was brought into the Mighty Helm.

Rarity offers her own favorite tale of a legend from the past, Mistmane. As the most talented and beautiful unicorn from her Asian-style village, she was invited to train further at a nearby magic school, much to the jealousy of her friend, Sable Spirit. When Mistmane returned to her village many years later, she found it nearly devastated, as Sable had made herself Empress and robbed her home of its beauty after a spell to turn herself beautiful made her hideous instead. Still filled with bitterness, Sable attacked Mistmane, who was able to fight back and contain Sable. Mistmane sacrificed her beauty to rejuvenate the entire village and Sable as well, inspiring Sable to change her ways. Afterwards, Mistmane left to spread the beauty of nature across Equestria.

In the interim, the fly-der swarm has started to invade the cave, and Rainbow Dash causes a cave-in to block the entrance. She then goes on to tell her favorite legend, Flash Magnus, who was a cadet in the Cloudsdale Royal Legion led by Captain Ironhead. On one mission, Flash's squadron had to cross the Dragon Lands to get home, but encountered the pair of dragons that lived there. The dragons captured two of the squad, and Ironhead considered leaving them behind. Flash instead had a plan to distract the dragons long enough for Ironhead and the others to rescue the two. Ironhead, impressed with the plan, gave Flash a special shield to help avert the dragon's fiery breath. As planned, Flash drew the dragons away, and the two other pegasi were rescued. To help save Flash, Ironhead and the others came together to build up a storm cloud that would shock the dragons and send them away. For his bravery, Ironhead allowed Flash to keep the shield.

When the story concludes, Applejack no longer hears the fly-ders outside, but the rock cave-in is too thick to dig through. Rarity suggests trying the back way out of the cave, and then eventually come to a running river. They dive in and are soon spat out right at Winsome Falls, a new shortcut for them. The CMC, emboldened by the stories they heard, figure they can help make a perfect camp here, and the older ponies go chasing off after them to set it up.