Recap / My Little Pony: Friendship Is Magic S4 E17 "Somepony to Watch over Me" 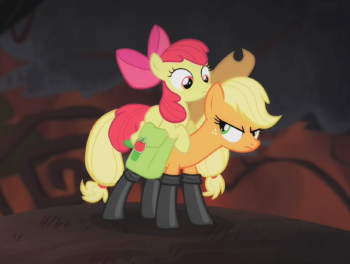 Circumstances take Big Macintosh, Applejack, and Granny Smith away from Sweet Apple Acres for a day — AJ and Big Mac are making pie deliveries to far-off towns, while Granny Smith is visiting Apple family relatives — so Apple Bloom has the care of the farm. The filly is ecstatic to be trusted to handle herself on her own, but Applejack can't stop worrying that something will go wrong. Apple Bloom manages to get all of her chores done with time to spare, but Applejack abruptly returns and catches her at the worst possible moment (dancing on a table). Apple Bloom loses her balance, and the resulting mess confirms all of Applejack's fearful suspicions. She abandons her pie delivery and remains home to look after her "helpless" little sister.

Applejack's overprotective behavior frustrates her little sister. Apple Bloom invites the other Cutie Mark Crusaders over and asks them to help her prove that she's capable of handling things on her own. A glance out the window reveals the pie cart Applejack was supposed to deliver, and the trio forms a plan: Apple Bloom will sneak out with the cart and make the delivery on her own while Scootaloo and Sweetie Belle pretend to be Apple Bloom to throw off Applejack. Sweetie Belle falls asleep in Apple Bloom's bed, while Scootaloo hides in the closet. When Applejack finally begins to realize that Apple Bloom is fine without her constant check-ins, and that that maybe she's been babying her little sister too much, Scootaloo happily cries out from the closet and exposes the ruse.

Applejack runs off to rescue her sister, knowing that the pie delivery route runs through a fire swamp inhabited by a hungry chimera. Meanwhile, Apple Bloom has been confronted by the chimera, who demands the pie cart. She refuses to surrender the pies, even after the chimera corners her. The three heads of the chimera argue over Apple Bloom, who can only wish that her sister were there. Just then, Applejack appears, subdues the chimera and gets Apple Bloom to safety.

Even though she is furious, Applejack can't help but be impressed that Apple Bloom got herself and the pie cart safely this far, and she finally admits that her little sister can look after herself. After completing the delivery, Applejack warns Apple Bloom that she'll most likely be grounded by Granny Smith once they get back, but she promises that next time the Apples need to leave the farm to Apple Bloom, she'll think of her little sister as much more capable.