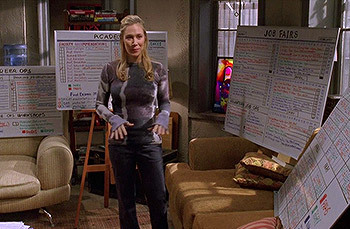 Paris and her faithful whiteboards.
"The problem is I just finished planning my schedule for the month, but I forgot to leave time to plan for next month! Don't you see? There's no time in my schedule to put together another schedule!"
— Twilight Sparkle, My Little Pony: Friendship Is Magic, "It's About Time"
Advertisement:

So you've got things you want to do. Whether it's the laundry, the dishes, or your latest Evil Plan to dominate the universe, you have to keep track of them all. A checklist is a nice, handy, quick way... most of the time.

Some people take their listmaking just a little too seriously. They may plan every tiny part of the day on a list, right down to the things most people won't even bother with because they're just that obvious, such as "go to sleep". Or they may start to see completing the list as a goal in itself, have already completed all of the tasks except one, and spend extenuating effort trying to complete that last one. This tendency is obviously Truth in Television for many.

This is usually Played for Laughs in fiction, especially with comic villains.

The lists they make likely involve at least one trope of the Index of Lists.