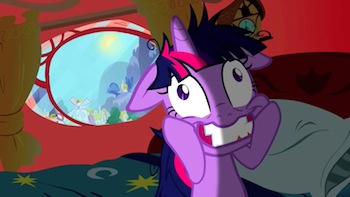 "Clock is ticking, Twilight! Clock... is... TICKING!!!"
Twilight Sparkle: We haven't sent a letter to Princess Celestia this week!?
Spike: Why? Is that bad?
Twilight Sparkle: Bad? Bad?! Of course it's bad! I'm supposed to send Princess Celestia a letter every week telling her a lesson I've learned about friendship! Not every other week! Not every ten days! EVERY! SINGLE! WEEK!
Written by Meghan McCarthy
Advertisement:

Today is a typical day for Twilight Sparkle: Order parchment, drop off laundry, pick up cupcakes for a picnic, make a ridiculous amount of checklists, the usual. Everything seems to be in order, until she realizes what she hasn't done — send her weekly letter to Princess Celestia about what she's learned on friendship. The last letter she sent was last Tuesday... and today is Tuesday. Twilight begins to panic, convinced that missing the deadline will get her sent back to Magic Kindergarten. Needing something to put in a letter, she decides to visit her friends, trying to find one with a problem that needs solving.

Twilight Sparkle: Sooooo... got any problems, troubles, conundrums, or any other sort of issues major or minor that I as a good friend could help you solve? (grin!)
Spike: Hum...hmm...huh...huuuh...I got nothing.
Advertisement:

Her first stop is Rarity's boutique, just as the fashonista is having an epic meltdown. It turns out she's lost a ribbon, which she finds a few seconds later. False alarm.

Next stop is Sweet Apple Acres, where Rainbow Dash is wildly demolishing one of Applejack's barns. Clearly the two ponies are having a fight, and Twilight must intercede! But it's Not What It Looks Like; Applejack wants to build a new barn and has asked Rainbow Dash to tear down the old one, which she promptly accomplishes with a spectacular aerial dive and the Sonic Rainboom.

Growing desperate, Twilight moves on to Fluttershy's place, since the timid pony always has problems to work out. She arrives to see Fluttershy beating the crap out of a bear, and laments her finally growing a spine on the one day she needed her to be a scaredycat. As Twilight leaves, we learn Fluttershy was actually performing chiropractic therapy for him.

By the time she meets her friends for the picnic, Twilight is panicking to the brink of insanity. Although her friends dismiss her concerns as overblown, Twilight becomes even more convinced that Princess Celestia will be furious if she doesn't get her letter in on time.

With dusk fast approaching, Twilight gets an idea — since she can't find a problem to solve, she'll have to make one. Taking an old doll of hers, she tries to get the Cutie Mark Crusaders interested in it, hoping to create an Apple of Discord situation. Unfortunately, the kids simply don't care for the tattered old doll, so Twilight uses a spell to make it irresistible to everyone who sees it. It works at first...

Scootaloo: I want it!
Apple Bloom: I need it!
Sweetie Belle: I really like her mane!

...but things spiral out of control when more and more ponies spot the doll and immediately find it irresistible. Soon the entire town is fighting for it, which keeps Twilight from getting a clear line-of-sight to cancel the spell.

By the time the stampede of fighting ponies reaches the picnic, it's sundown, rendering Twilight's efforts meaningless. To make matters worse, Princess Celestia arrives. She quickly removes the spell and restores everyone to normalcy (despite the spell's dispersal, Big Macintosh grabs the doll with a triumphant whinny and runs), then sternly orders Twilight to meet her at the library. As Twilight leaves, her friends finally realize they shouldn't have been so dismissive of her fears earlier.

At the library, Twilight explains that she caused all the chaos out of her fears of not being a good student; just as Celestia starts reassuring her, her friends pour in and defend Twilight, blaming themselves for not helping her sooner. Princess Celestia was concerned and worried, but not genuinely as furious as Twilight feared, but everypony else, on seeing her arrival, took it with the same exaggerated seriousness Twilight had expressed. Celestia decides to "forgive" Twilight on one condition: that from here on out, all of her friends join in the letter-writing... but only when they actually have lessons to report.

And how did Celestia know to arrive? Spike wrote her about Twilight Sparkle's anxiety, which prompts the touched pony to offer her thanks with a hug. Once Celestia's on her way back to Canterlot, the group settles down to write a joint letter about what they've learned: that you shouldn't dismiss your friend's worries even if they are blown out of proportion, and that you shouldn't let your fears turn a small problem into a big problem. Spike tries to add a paragraph to the letter lauding his having been the only one to take Twilight's concerns seriously, but Twilight makes him nix it. Everypony laughs.

I haven't made any page edits yet this week! But if I create a new trope, everybody will HAVE TO MAKE EDITS!!! *snaps* EEEHEHEHEEE!!!!
What's all the commotion about?
They're Edit Warring over that trope!
That incredible, amazing trope!
Feedback

Want It, Need It spell

Twilight enchants her Smarty Pants doll, causing the CMC to gush over it to the point of fighting over it.

Want It, Need It spell

Twilight enchants her Smarty Pants doll, causing the CMC to gush over it to the point of fighting over it.