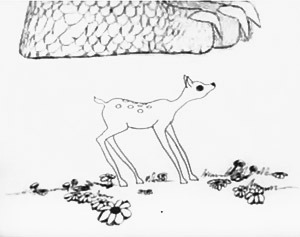 .
Ratchet: [The humans] have no protective shell. If they get underfoot they will go... squish.
Optimus Prime: Then, for the time being Ratchet, we must watch where we step.
—Two Mechanical Lifeforms facing a dilemma of working with humans, Transformers: Prime.
Advertisement:

Simply put, this is about comparatively small "good" characters or things being crushed underfoot by comparatively gigantic dangers. This can take two main forms.

First, a "straight" one, commonplace in cartoons involving mice, Incredible Shrinking Man scenarios, or normal-size humans who have to deal with Attack of the 50-Foot Whatever — but usually that's more a desperate attempt to avoid being trampled. Often associated with an Implacable Man or The Juggernaut.

Then, secondly, it can be used as a small Kick the Dog moment for a character so mean, evil or determined that nothing stands in their way; and just to prove it to the audience, the camera will turn to a shot of their feet (or their mount's feet), as they walk over and stomp on, crush or trample underfoot things that symbolize innocence, peace, happiness, or niceness, such as:

Compare Giant Foot of Stomping and Fearsome Foot. Named after (but has absolutely nothing to do with) a song by Led Zeppelin. Not related to Curb-Stomp Battle, although a particularly brutal one-sided fight may involve actual stomping. If the villain intentionally uses their foot to trample an object of sentimental value to a character, that's Crush the Keepsake.

At the beginning of the movie Ice Age, Scrat gets trampled by several animals in a row.

At the beginning of the movie Ice Age, Scrat gets trampled by several animals in a row.