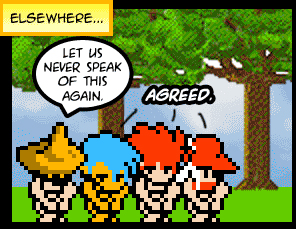 Jesse: You know how you have those experiences you remember and reminisce about for the rest of your life?
Axel: Yeah?
Jesse: This isn't one of those. Let's never discuss this ever again.
— Minecraft: Story Mode
Advertisement:

Hilarity Ensues because a character must perform an act that is either against their nature or which they have vehemently and constantly protested against doing. Said action can also be just plain humiliating or all of the above—to all parties, perhaps. When this act is aided or witnessed, a character insists that either they must all never speak of this again, ever; or that a specific person who is guaranteed to ride them never hears of it.

Or to put it another way, "What happened here stays here."