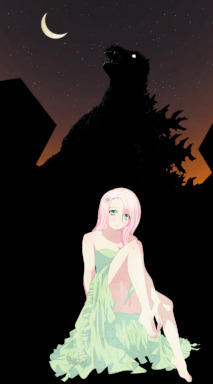 A crossover fanfiction between My Little Pony: Friendship Is Magic and Godzilla set after the events of Season 3 and in between events of Season 4. When exploring an unknown magical spike in the old castle of Celestia and Luna, a strange portal sucks in Fluttershy, transporting her to Tokyo, Japan and turning her into a human in the process. She is taken in by a young boy named Kenji. However, at the same time, she finds herself in the crossfire of a war between humans and Kaiju, gigantic beasts brought onto man by their own arrogance. To make matters even worse, the more malevolent of these monsters have turned their attention to her.