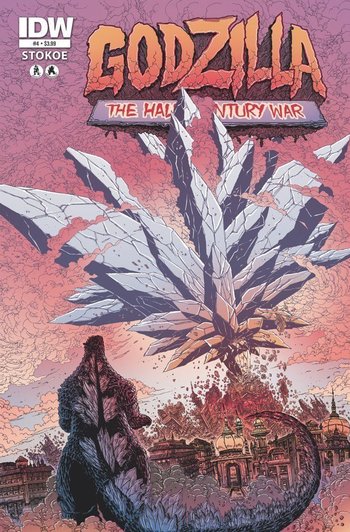 'It's been nearly fifty years now and I can still remember, clear as day, the first time I saw him. Memories fade, details fog. Dates and people, sounds and smells blur together. But not that day in the harbor....Back then I was a young man, barely out of my teens. Lieutenant Ota Murakami, 23 months into an enlistment with the Japanese Self Defense and looking for a bit of adventure. I figured I could find some riding on top of a tank....That moment I was brought back to what an American GI returning from a stint in Korea said to me after I heedlessly asked what the action was like. "Watch out kid. You'll always remember your first taste."'
— Ota Murakami
Advertisement:

In 2010, IDW Publishing acquired the rights to make a Godzilla comic, this time featuring a good chunk of Godzilla's classic adversaries. There have been three ongoing series along with several miniseries. One of the miniseries is The Half-Century War, written and drawn by James Stokoe in 2012.

Lieutenant Ota Murakami is deployed with Kentaro Yoshihara to patrol Tokyo in 1954, only to run afoul of the newly arrived Godzilla. Barely surviving the encounter, the two of them are recruited into the newly formed Anti Megalosaur Force by American Colonel Schooler. Over the next fifty years they are involved in combat with many different monsters, but Godzilla, more than any other, remains Ota's Great White Whale.