Continued from "The Crystal Empire – Part 1" 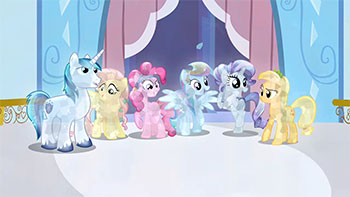 When we last left our heroes, the Crystal Heart was discovered to be a real artifact, which they needed to find. Princess Cadance fainted due to exhaustion, causing her magic shield to vanish, and King Sombra was now advancing on the Crystal Empire...

...However, Shining Armor helps Princess Cadance to her hooves and she manages to conjure up the shield in the nick of time, halting Sombra's advance just before he can cross the threshold of the Empire's borders, and cutting off the tip of his horn. Shining Armor volunteers to find the Crystal Heart, but Twilight tells him to look after Cadance and sets off to find it herself. She tells Rainbow Dash to rally the others to keep the Crystal Ponies from discovering the fake Heart, and to keep the fair going to distract them from King Sombra's return, or else they will sink so far into despair that it won't matter if the real Heart is found. As they split, the severed tip of Sombra's horn sinks into the ground, causing a small black crystal to sprout.

Rainbow Dash informs the others of the problem, and Spike runs off to help Twilight. Applejack tries to keep the Crystal Ponies away from the still-covered fake Crystal Heart, while Rarity, Rainbow Dash, and Fluttershy do their best to distract the Crystal Ponies; Pinkie Pie, on the other hand, is distracted by the latter three. Their attempts are at first successful, but Applejack wonders how long their success will hold up. Meanwhile, the black crystal that sprouted from Sombra's horn begins to taint the surrounding crystals, while the barrier continues to weaken.

Spike persuades Twilight to bring him along—on the condition that he not lift a claw to help her, as per Celestia's instructions that only she can pass her test, which she now believes is to find the Crystal Heart. Reasoning that King Sombra was counting on the Crystal Ponies being too frightened of the castle to enter it, Twilight deduces that the Crystal Heart must be hidden there. Meanwhile, Rainbow Dash and Applejack struggle to keep the Crystal Ponies from uncovering the fake Heart. Applejack tells her to tone down on the aggressiveness, suggesting she show them her jousting skills, and Rainbow shanghais Fluttershy into a jousting match.

Twilight and Spike search through the castle, eventually entering the throne room where Twilight notices the throne is made of the same crystal that Princess Celestia used to show her how the Crystal Ponies' magic could be reflected across Equestria. Using the dark magic of King Sombra, she opens an underground secret passageway with a long, winding staircase that leads to a door at the bottom. After attempting to open the door with her own magic, only to have it constantly move around the walls of the pit, Twilight becomes infuriated enough that she uses dark magic on the door's gem at the top, causing it to open and emit a bright light. Twilight enters the door, delighted that she has found the Crystal Heart...

...Only to find herself standing in Canterlot's throne room, where Princess Celestia coldly tells her that she has failed her test. Twilight has no idea how she got there, but Princess Celestia says that it doesn't matter; she failed her test and will no longer continue her magical education. Twilight notes that Princess Celestia never said anything about Twilight not being her student anymore if she failed, but Celestia ignores her and walks away, leaving her staring at a window depicting Sombra's triumphant return. She is snapped out of it by Spike's voice, and she realizes that the door is enchanted to show ponies their worst fears. Twilight uses her normal magic to open the door again, this time leading to the base of the tallest tower of the Crystal Empire Castle... and more stairs. Spike reasons the endless staircase must be another trap, so Twilight reverses gravity, allowing the two of them to slide up the incline underneath the stairs.

Meanwhile, the other five are losing the attention of the Crystal Ponies, who are starting to swarm around the Crystal Heart to see it again. Pinkie Pie does her best to entertain them by juggling flugelhorns while balanced on a rubber ball. Suddenly, she slips and the ball knocks off the flag covering the fake Crystal Heart, and their ruse is discovered. At the same time, Cadance loses all magical power from exhaustion, and the shield vanishes once again. King Sombra's horn regrows, and the black crystal that had started growing now begins to duplicate and spread toward the castle. The Crystal Ponies notice and panic, reverting to their previous dull coloration, while Shining Armor and Cadance can do nothing to stop his advance.

Twilight Sparkle arrives at the top of the tower to find the real Crystal Heart floating before her, and she steps forward to take it—and activates an alarm. Alerted to her presence in the tower, Sombra traps her in a cage of black crystals, but not before she manages to knock the Crystal Heart to Spike. Spike rushes forward to help her, but more black crystals sprout, blocking his approach. Realizing she may not be able to escape in time to prevent Sombra's attack, Twilight tells Spike he has to be the one to bring the Crystal Heart to the fair.

Spike dashes off, climbing down the spires of black crystal growing from the tower, but King Sombra notices and forms a black crystal, which rockets towards the Crystal Heart, regaining his original form in the process. Spike slips and falls off the tower, but Shining Armor grabs Princess Cadance and throws her towards where Spike and Sombra will collide. Just before Sombra intercepts Spike, Cadance snatches Spike out of midair and they take the Crystal Heart to where the fake one was located. The combined power of Cadance—who the Crystal Ponies recognize as the Crystal Princess and the rightful ruler of the Crystal Empire—and the Crystal Ponies empower the Crystal Heart to send out a magical field of light and love, which obliterates King Sombra and restores the Empire to the way it was before. In the process it transforms everypony in the vicinity into translucent Crystal Ponies. Sadly for Rarity, this transformation lasts only as long as they are in the Crystal Empire, but Applejack cheers her up by saying that things are better when they're a ''rarity''.

The Mane Six return to Canterlot, where a new stained glass portrait of Spike holding the Crystal Heart has been put up. Princess Celestia explains to Twilight that although she did not accomplish the task she was told to do, her willingness to see the deed through rather than accomplish it herself, thus attending to the needs of the many as opposed to herself, has allowed her to pass her test and she can begin the next stage of her magical education. Twilight and her friends celebrate on the train ride back to Ponyville as night falls, revealing the aurora borealis that has begun to emanate from the Crystal Empire in the night sky. Princess Celestia and Princess Luna watch the train go and Celestia nods at Luna, who summons a book with stars and swirls on the cover...